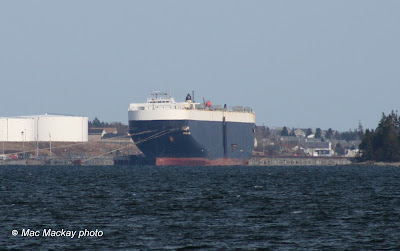 1. Green Ridge at Autoport, as seen from Halifax.

A typical autocarrier in most respects, except that it is flying the United States flag, Green Ridge unloaded at Autoport today. Built in 1998 by Imabari Zosen in Marugame, Japan as Hercules Leader, the ship sailed under the Panama flag as a member of the  NYK line fleet of autocarriers until 2005.
It was then acquired by Central Gulf Lines of Mobile, AB, (LMS Ship Management of New Orleans, managers) and raised the US flag.
As a foreign built ship it is not Jones Act compliant, (it cannot trade between US ports) but it is part of a fleet of foreign going US ships available as strategic assets if needed. Its US crew also get valuable deep sea experience which might not otherwise be possible on domestic ships.
The US Maritime Administration (MARAD) in fact subsidizes 42 ships under the Maritime Security Program (MSP) program to:

Most of the ship are container ships, but there are also tankers and autocarriers, giving a broad range of possible call ups in case of national security needs.More at:http://www.marad.dot.gov/documents/VESSEL_TRANSFER_FACTS.pdf