The spanking new French frigate Aquitaine put in to Halifax today as part of its first "Long Cruise" Following commissioning in November 23, 2012, the FREMM (frégate multi-mission) has been working up with various milestones, such as first replenishment at sea (January), first missile firing (Ferbruary) and most recently on April 9 a replenishment at sea from a USN T-AO off Norfolk.
http://www.navyrecognition.com/index.php/news/defence-news/year-2013-news/april-2013-navy-world-naval-forces-maritime-industry-technology-news/985-fremm-aquitaine-french-navys-newest-frigate-conducts-ras-with-us-navy-units.html 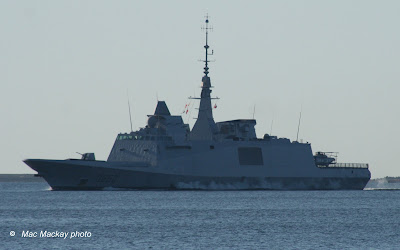 This is the first of nine state of the art frigates for the French Navy, ten for the Italian navy and one for Morocco.
Despite Halifax's notorious early morning sunshine, it was possible to see a number of the ship's features, including its helicopter (outside its hangar) and a rapidly spinning radar in a pyramidal shaped box mounted on the bridge.
The features of the FREMM  are too numerous to mention, but there are scores of excellent descriptions and  videos on the net:

Given the tendency of visiting naval ships to pass east of George's Island on departure, there is little chance of better pictures when the ship leaves, but I will update this post if I get more. 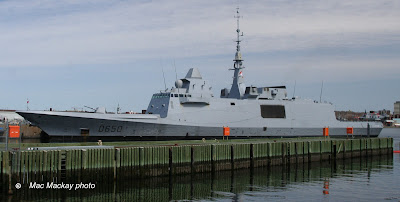 Once tied up at HMC Dockyard, in full sun, a few more details become visible, including the helo perched over the stern.
Posted by Mac at 9:17 AM