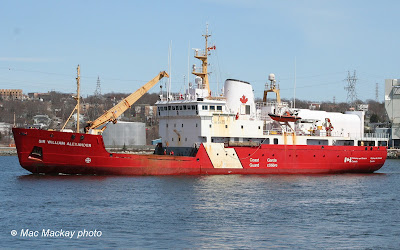 1. CCGS Sir Wialliam Alexander arriving this afternoon,April 22, showing some signs of wear and tear after a busy fall and winter with buoy removals and now spring replacements. Note the port bridge wing platform is folded upright, adding to the rust streaks.

CCGS Sir William Alexander (call sign CGUM) arrived at BIO this afternoon April 22.On Wednesday April 24 there will be a bidders conference on board prior to her alongside refit scheduled for June 13 to July 19 at BIO.
Completed in 1987 by Marine Industries in Sorel, QC, the Type 1100 light icebreaker and navaids ship has been based in Halifax since its arrival here in May 1987 (it called in at Charlottetown en route - its alternate home port.)

The ship had its moment of glory in June 1995 when it hosted dignitaries during the G-7 Summit:


2. Escorted by high speed patrol boats and helicopters, some G-7 leaders are hosted under a tent on the helo deck for a harbour cruise between Shearwater and Historic Properties. (The ship appears as built, with a cargo derrick).


From August to September 1998 it had a major overhaul during which saw its derrick removed and the installation of a crane in its place. Sister ship CCGS Edward Cornwallis, also based in Halifax, still has the derrick, making it easy to distinguish between the two ships (as long as you remember it is the Sir Bill with the crane, and Ed with the derrick).
Posted by Mac at 9:57 AM