HR Maria - wind mill blades, but not for us

Another in the long line of ships calling for the Canadian Food Inspection Agency arrived at anchorage number two today for Asian Gyspy Moth inspection. HR Maria, although registered in Liberia is German owned and has carried several names in its history. It was built in 1998 for Dutch owners as Maria Green but became BBC India from 2004 to 2008 then reverted to Maria Green again to 2010 then ran as SE Veridian until 2012 when it received is current name.
Built by Schelde Scheepsbouw. BV in Vlissingen, Netherlands, she is a general cargo ship of 11,894 gross tons and 17,539 deadweight. Strengthened for heavy cargoes and Ice Class 1A, the ship also has three 60 tonne cranes. Large hatches permit the carriage of oversize and project cargoes.

On this particular trip the ship has a load of wind mill vanes bound for Trois-Rivières, QC. Its last port of call was Emden, Germany and it will be sailing this afternoon.

As Maria Green its first visit to Halifax, back in 2001, was more prolonged. Bound for Halifax to be fitted to carry fibreoptic cable, it was struck by an LNG tanker in the Bay of Biscay. Having survived the impact and the subsequent boiler blow off from the tanker, Maria Green was able to carry on to Halifax, arriving May 9. A number of plates had to be cut out of the bow area and replaced while the other work to carry cable was completed. 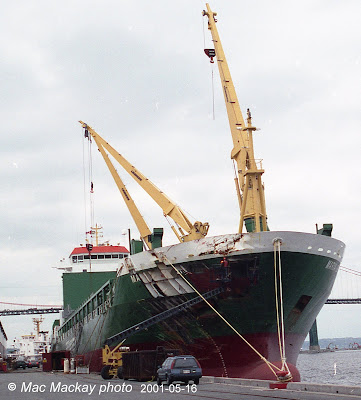 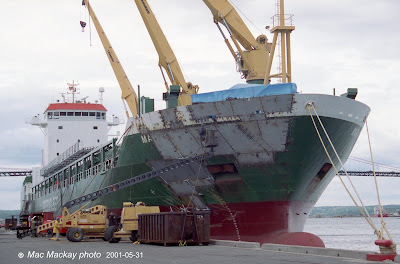 The ship was able sail on June 2 for Portsmouth, NH where it loaded its cargo and received a final coat of paint. The only outward sign of its ability to carry cable was a railing above the starboard rail, but there was a lot of special framing in her holds.

The ship returned to Halifax in November 2001 from Cape Town to have its cable tanks reconfigured. It sailed again January 5, 2002 for Portsmouth NH (where the cable is manufactured) for another load.
Posted by Mac at 12:09 PM