The rescue of six survivors from the fire and sinking of the schooner Delroy more than forty years ago, has been recognized by the Red Cross with Rescuer Awards to two men.
Loyola Pomeroy was aboard the schooner and Captain Ray Berkshire was skipper of a nearby fishing boat when an engine room fire broke out on the Delroy on July 28, 1972. The fire spread so rapidly that there was no time to issue a Mayday. Capt. Berkshire saw the fire from some distance away and came to scene, rescuing six people from the water. Mr. Pomeroy was one of those clinging to a dory which had floated free from the Delroy as it sank.Of the sixteen people aboard the schooner at the time only six survived.
Delroy was sailing from Merisheen Island to Arnold's Cove. A typical small trading schooner of 75 feet in length, it was a frequent caller in Halifax with salt fish from Newfoundland , returning with freight and salt to its home port. Its usual berth was at Smith's wharf, but it also loaded at Pier 9B from CN box cars. Built along traditional schooner lines in 1949 in Burnside, Bonavista Bay, it had a small cabin aft, directly over the engine room. It was operated for many years by Jerry Petite and Sons Ltd of English Harbour West.
1. Unloading salt fish in September 1968 at Smith's Wharf, (now the site of the Maritime Museum of the Atlantic) Delroy was an attractive little schooner rigged cargo vessel. It still carried sail. A dory can be seen stowed on deck. As the vessel sank, it is probably this same dory that floated free. 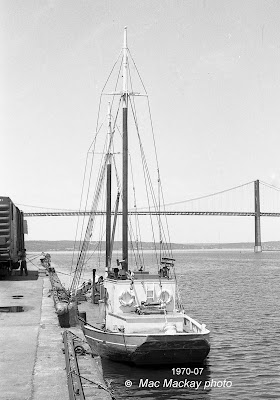 2. In July 1970 (with the newly completed A. Murray MacKay bridge in the background*) Delroy is tied up at Pier 9B loading freight from a CN boxcar. 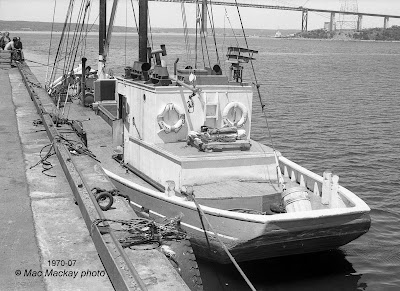 3. The crew takes a break from loading. There was accommodation forward in a forecastle and a small cabin aft, directly over the engine. It is hard to imagine sixteen people aboard this small craft at one time. Note the ax, fire pails and life preservers.

* The A. Murray MacKay bridge opened on July 10, 1970. The fact that there is no traffic in view in these photos suggests that I took this photos before July 10. Unfortunately I did not record the date at the time.
Posted by Mac at 9:43 AM