A pair of Fednav ships have been sold to Greek owners. According to brokers' reports, Federal Progress and Federal Venture have been sold to Pendulum Shipping affiliates for $2.75mn each in an en bloc deal. Both ships were once familiar sights in Halifax under their original names, Northern Progress and Northern Venture. Built as bulk carriers for Alcan (The Aluminum Company of Canada) they were specially suited for the transport of alumina to Port Alfred, QC (now La Baie) in winter. Although they operated year round, they often called in Halifax in winter for bunkers or voyage repairs.
Northern Venture was delivered in November 1989, followed by Northern Progress in December. Gearless bulk carriers, they both measured 21,469 gross tons and 36,445 deadweight tonnes and were rated Ice class 1A by Lloyd's Register. The were built by Nippon Kokan KK of Tsu, Japan and fitted with Sulzer engines, built under license by NKKK.
Alcan sold both ships to Fednav in late 2001 and they each arrived in turn in Halifax in early 2002  for drydocking, pre-purchase survey and renaming.

1. Northern Venture leaving Halifax. Both ships had a special paint coating on the lower hull. which stood up well to abrasion in ice. 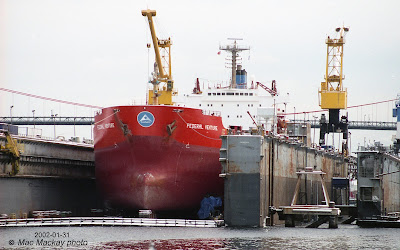 2. Once sold to Fednav, the ship's name was changed, but it continued to sail in Alcan colours for some time, carrying the Alcan symbol on the bow and the blue Alcan funnel.

3. By 2003 the ship had been repainted and lost its distinctive Alcan hull paint.

4. Northern Progress shows off its unique hull paint which swept up over the bulbous bow.

5. As Federal Progress, Fednav's standard hull paint did not appear to stand up as well, and was well weathered in less than a year.

The ships continued to deliver alumina to Alcoa, but were also used by Fednav in other bulk carrying trades. They have been seen only rarely in Halifax in recent years. As ships nearly 25 years old, it is expected that they will only be operating for their new owners for a few years before they head for the scrap yard.
Posted by Mac at 9:58 PM