Halifax Shipyard - one in, one out

Two moves this week at Halifax Shipyard, one in  and one out.
First was the "in". HMCS Charlottetown arrived in the Graving Dock for the beginning of the shipyard portion of its FELEX project.

It takes a very wide angle lens to get the whole ship in one picture once it is in the graving dock.

The "out" was CCGS  G.Peddle S.C. which was rolled out today. It will be a few months yet before it is ready to launch. The ongoing construction of a new electrical sub-station and three new power poles in the shipyard means that the previous vantage point for roll outs is now gone. 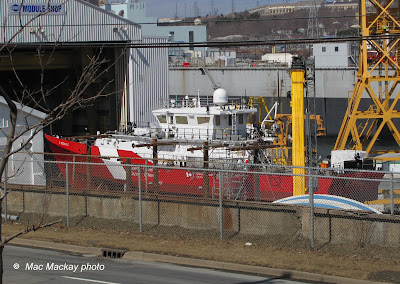 The old vantage point (right by the catch basin along the curb) was bad enough with the double layer of security fencing, but the new spot  leaves a lot to be desired. Boo Hoo.
Posted by Mac at 7:27 PM