I did manage to squeeze my camera through the chain link fence for the arrival of Tramper today. (See previous post). 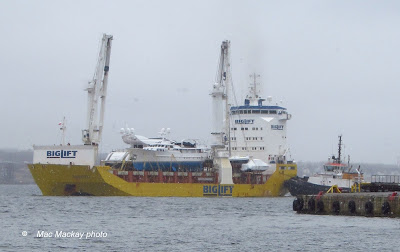 1. In a snow shower, Tramper rounds pier 26 with a deck load of luxury yachts, with the tug Atlantic Larch giving a hand.

There still appears to be a booming business in transporting yachts from the location to location for the seasons. By my count Tramper had five boats on deck. A small motorboat in a tarp, a small sport cruiser, a sloop rigged sail boat (with mast standing), a traditional luxury yacht and an ultra-modern modern luxury yacht. Despite all these, number one hatchway appeared to be ,ore or less clear to load the tow boilers in Halifax. 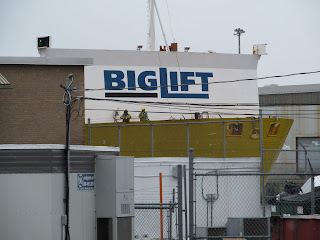 2. Not visible in the 2003 visit due to ice, the BigLift name is front and centre on the ship's huge breakwater. 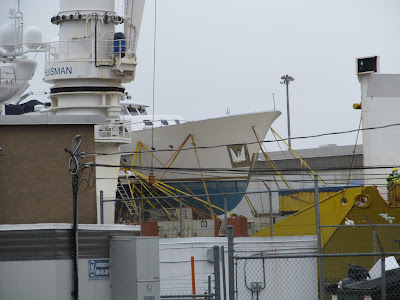 2. The bow of a traditional style cruising yacht is just visible. It is stowed in its own cradle on the port side. (Yacht's name not visible). 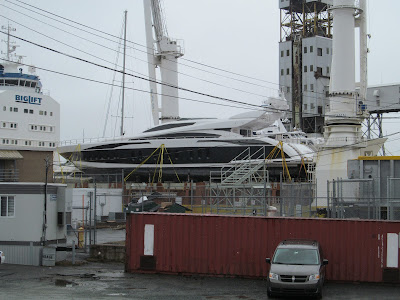 3. An ultra-modern yacht is stowed on the starboard side. A sloop rigged sailboat's mast is visible behind it. (Yachts' names not visible). 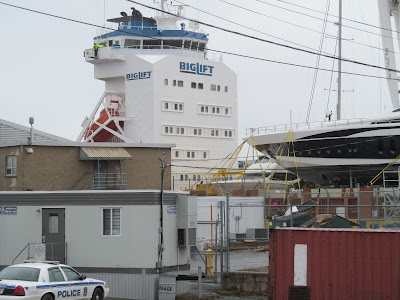 4. The pilot is conning the ship from the bridge wing high above the main deck, where two more boats are stowed (see also photo #1). Note the bridge wing has a retractable section to meet St.Lawrence Seaway regulations, which forbid bridge wings from extending beyond the ship's side, due to the depth of the lock chambers.