It was a two ship day at Autoport, with one short visit in the morning and a longer stay starting this afternoon.

First in was Grande Roma. The ship, with its Grimadli Group white over yellow colour scheme brightened up an otherwise dull morning. The ship sailed at noon time. 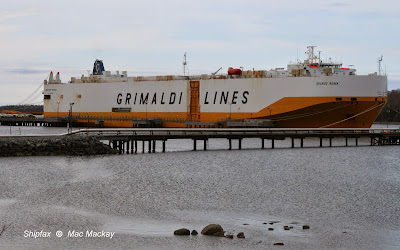 Grande Roma at Autoport, with the McAsphalt pier in the foreground.

Later this afternoon the NYK Line autocarrier Dionysos Leader arrived. It will remain in port over night. 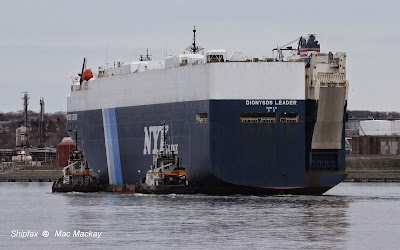 Dionysos Leader has the rounded edges of newer autocarriers.

The ship dates from 2009 when it was built by Shin Kurushima in Toyohashi. The 62,993 grt, 21,438 dwt ship flies the Japanese flag. [Dionysos was the Greek god of the harvest, and winemaking,]

Autoport is till working too reduce the backlog created during the March ice and snow storms. They are still using some overflow areas for light truck chassis. Also the IEL pier has been pressed into service to store  domestic cars bound for Newfoundland. They are moved to Autoport to suit the arrivals and deparurtes of Oceanex Sanderling which is now making two trips per week. 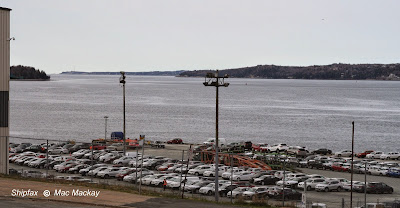