Korean built ships are so prolific these days that it is no coincidence when there are two or more Korean built ships in port at one time, but it might qualify if they were built in the same shipyard, and not one of the majors.

Two of today's arrivals were from the Samho Heavy Industries yards in Samho, South Korea, but built several years apart. 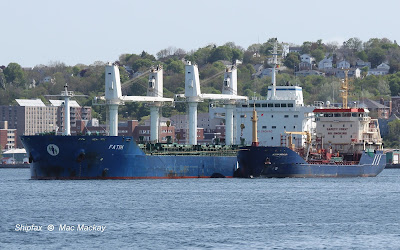 Fatih sails under threatening skies after bunkering from Algoma Dartmouth.

In for bunkers the Turkish owned, Maltese flagged bulker Fatih was built in 2011 and measures 23,204 grt, 35,365 dwt. It would appear very similar to tankers built at the same yard but for the four cargo cranes, set very high to allow for deck loads - even containers. Ciner Navigation, based in Istanbul is one of several subsidiaries of a large Turkish shipowner, with a fleet of about 18 ships. Fatih gave Rio Haina, Dominican Republic as it destination. 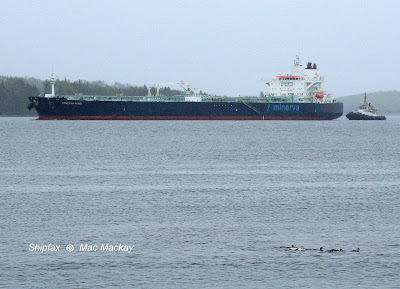 A small fleet of eider ducks seem oblivious to the rain that greeted the arrival of Minerva Maya.

As the weather continued to deteriorate during the day it eventually turned to rain, which nicely blurred the arrival of Minerva Maya. It came from the Samho yard in 2002, and is a crude oil tanker of 57,508 grt, 105,709 dwt. Flying the Greek flag for owners Minerva Marine Inc of Athens, it is in port for Asian gypsy moth inspection.


It would be no coincidence at all if two ships from the giant Korean yard Hyundai Heavy Industries were to appear in Halifax at the same time (it has probably happened many times!). The yard recently celebrated delivery of its 2,000th ship a record achieved by no other shipyard in history. It represents 126 million gross tons of shipping. Its first ship (not exactly a modest start) was the 226,000 tonne VLCC in 1974. The yard at Mipo, southeast of Seoul delivered its 1,000th ship in March 2002, and in 2004 achieved the 100 million gross tons mark. Both were also firsts for any shipyard.