The Halifax-built mini-cruise ship Pearl Mist made a half day visit to pier 22 today, sailing over the noon hour. 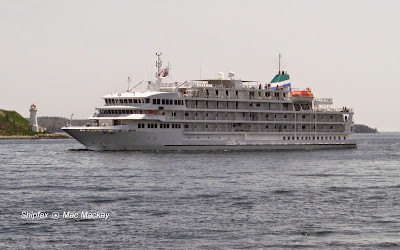 The ship went into service for the first time in 2013 after several years of layup during litigation between owner and builder.

The ship's next port of call is Pictou, NS, a port that never sees large cruise ships due to limited depth of water. The ship will call in Pictou eight times this year, and this will be the first. (They had expected ten calls, but the first two, planned for earlier in the season, were never confirmed.) Pearl Mist called in Pictou once in 2013 and twice in 2014.