Attended by CNAV Glenside and several small craft, USS Virginia has passed Meagher's Beach inbound. A 200 meter exclusion zone was declared around the sub during its transit.

The submarine USS Virginia SSN-744 arrived this morning and tied up at Shearwater, Jetty November Alpha. The lead vessel of the Virginia-class of nuclear submarines was laid down September 2, 1999,and launched August 16, 2003 by General Dynamics Electric Boat Division in Groton, CT. It was commissioned October 23, 2004 and is also based in Groton. It completed a 20 month overhaul in March 2012. 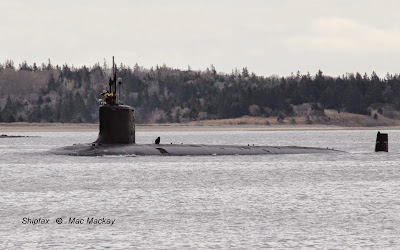 There is quite a crowd gathered on the sub's conning tower, including a civilian pilot from the Atlantic Pilotage Authority

As it nears Ives Knoll, the deck crew emerges. The pup tugs Listerville and Granville were waiting to assist in berthing at Shearwater.