It was slim pickings in the harbour today, as compared to yesterday, and due to various timing conflicts it was only possible to catch one ship underway, and that was the autocarrier Torino sailing from Autoport. 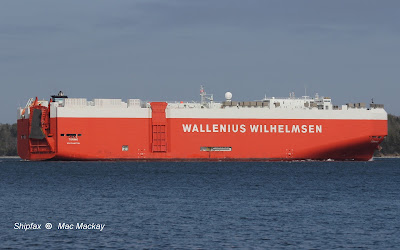 Torino strikes out for sea late this afternoon.

Owned by Wilhelmsen Lines Car Carriers through its Southampton office, the ship flies the British flag and sails for the combined Wallenius Wilhelmsen Lines. It was built in 2009 by Mitsubishi, Nagasaki and is 61,328 grt and 22,160 dwt.

There will be two departures after dark from Imperial Oil. Irving Oil's Acadian from number 3 dock and STI Texas City from number 4. 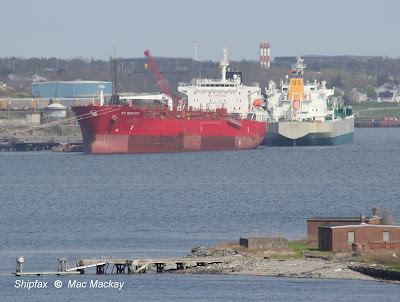 With the George's Island's jetty in the foreground, STI Texas City is in the last stages of unloading. Acadian, just astern, will also finish up tonight.


The aptly named STI Texas City works for Scorpio Ship Managwement of Monaco and flies the Marshall Islands flag. It was built in 2014 by SPP Shipbuilding Co of Sacheon, South Korea, and rings in at 29,732 grt, 49,990 dwt. It will go to anchor over night before sailing in the morning.

STI Texas City, shortly after arriving at Imperial Oil on May 25.