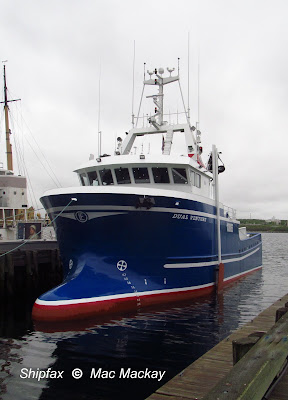 The first new herring seiner built in many years arrived in Halifax today fresh from the shipyard. Built by Chantier Naval Forillon in Gaspé, the 105 foot long boat is largest fishing vessel built by the shipyard. At a cost of $6mn it is the result of a joint venture between Lunar Fisheries of Scotland and a Nova Scotia operator, incorporated under the name Lunar Fisheries (New Brunswick) Ltd, but headquartered in Halifax.
The Scottish partner, based in Peterhead and Fraserburgh, is noted for its modern fleet of six vessels and also operates freezing, cold storage, transportation and other divisions. 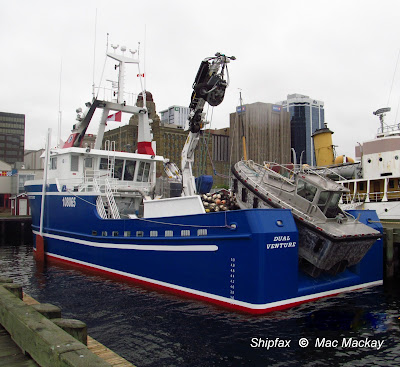 The new Dual Venture has several innovations including a prominent bulbous bow, and a unique stability system consisting of two paddle-like blades that are lowered at sea. Other smaller seiners rig paravanes and rely on them due to the extreme top hamper of their fishing gear. However they are awkward to deploy and their failure has lead to disastrous results.
The ship also does without the large mast and boom systems of other seiners, relying on an articulated crane to handle the seine. 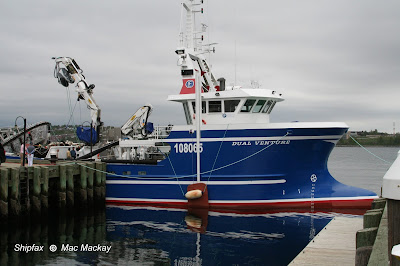 This is the second boat of the same name. A previous Dual Venture built in 1977 in North Vancouver, was sold late last year. 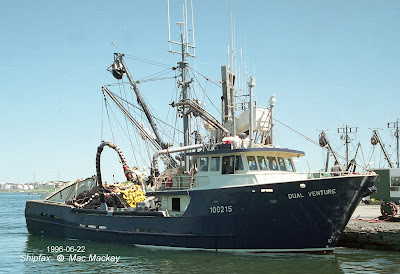 Update:
Thanks to a reader we learn that the new Dual Venture replaces two older seiners, not just the namesake, but also Island Pride No.1 built in 1978 in Vancouver. 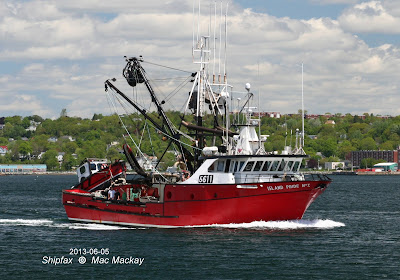 Island Pride No.1 and its  near sister Tasha Marie were among the most stylish of seiners.