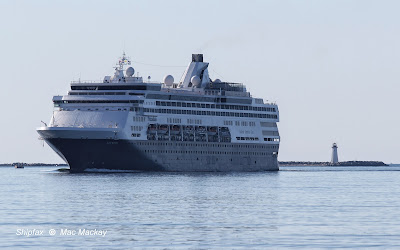 With a recorded wind speed of 3 knots, Veendam arrived in ideal conditions, its bulbous bow sliding just below the surface.

Last September the ship was working on one prop only*  and used tugs to berth in Halifax September 22 and Quebec City September 27. The ship then cancelled its September 28 cruise from Quebec to go to drydock in Philadelphia for repairs. Those repairs took three weeks (cancelling three cruises) and put it beyond the end of the 2014 season for Halifax.
The ship resumed regular service with an October 18 departure from Boston for San Diego. 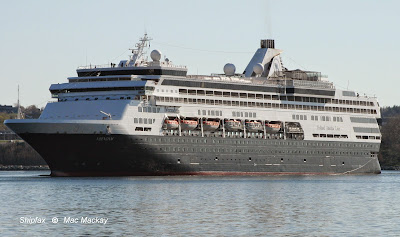 The ship passed east of George's Island inbound and picked up the morning sun on its port side as it swung around for Pier 22.

*the ship's propulsion system is diesel electric, with two diesel engines and three generators, driving two props. Holland America did not reveal the exact nature of the problem, but it had to be more than a bent prop blade, since that could have been repaired quickly.