The everlasting stream of product tankers continued today with some slight variations and the containers keep rolling. All on Korean built hulls.

Iron Point at anchor in the lower harbour, awaits the bunkering tanker.

Product tanker Iron Point stopped in for bunkers last night but the actual bunkering did not take place until this morning, and the ship sailed at noon.Maltese flagged and owned by PB Tankers of Palermo, Italy, the ship was built by STX Shipbuilding Co of Jinhae, South Korea in 2008 and measures 30,119 grt, 50,922 dwt.
One distinctive feature of the ship is its full width bridge.

CPO Korea lights up in the late sun as the Chebucto Pilot heads outbound ahead of Augusta Kontor.

Early this evening CPO Korea arrived and anchored in Bedford Basin. It is the second Claus-Peter Offen ship in Halifax in as many days, as fleet mate CPO Miami sailed early this morning on CMA/CGM business - see previous posts. CPO Korea was built - no surprise- in Korea, by Hyundai, Mipo measuring 29,636 grt, 51,747 dwt.
Its one distinctive feature is the projecting bridge front. 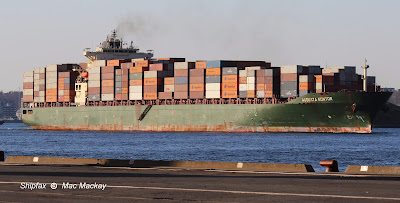 Ships of the G6 Alliance are hard to allocate to any one of the six partners, but it is a good guess that Augusta Kontor, due to its German ownership (Rickmers Reederei +Cie KG, Hamburg), is sailing for Hapag-Lloyd. Its first call under this name was in September 2014, and it has taken up a regular slot in the G6 rotation. As previously reported, it was built in 2004 by Hanjin, Busan, South Korea and measures 54,214 grt, 68,150 dwt with a capacity of 5060 TEU, including 454 reefers. It was initially named Maersk Douala, and after a five year charter to Maersk (during which it called in Halifax in 2004) it was renamed Charlotte C. Rickmers in 2009, then Charlotte briefly during 2014 before taking its present name.

Yesterday the container ship APL Coral sailed, a year to the day after my first photo of the ship in Halifax. http://shipfax.blogspot.ca/2014/05/apl-coral.html

With tethered escort Atlantic Oak on the stern, APL Coral is lined up for the Macdonald Bridge. The tug J.F.Whalen and its tow, Derrick No.3 hugged the Halifax side for passing, but will now cut across to the eastern side in the ships wake.