The Chinese flag bulker Mei Hua Hai arrived this morning for Asian Gypsy Moth inspection. The big ship came in via the western (deepwater) channel, which comes very close to the shore below York Redout.

The reason for the variation from the standard eastern channel was the arriving HMCS Windsor. To avoid having to overtake the Windsor in the narrow eastern channel, the bulker swung out into the western channel. Because of the dogleg in that channel around Middle Ground it is longer, and so Windsor was able to gain some ground and remain ahead. 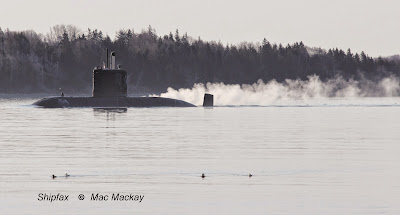 It was a placid morning and the eider ducks moved away from the incoming sub, 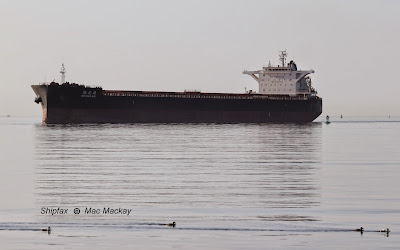 Mei Hua Hai was built in 2013 by Shanghai Jiangnan Changxing for Cosco Bulk of Tianjin. It measures 64,564 grt, 115,198 dwt. The ship remained in Number one anchorage for the inspection and sailed at noon for Port Cartier, QC to load iron ore.