Busy, but foggy and drizzly

A oslty drizzly day cleared off somewhat giving a chance to see most of the departures.

A new to Halifax autocarrier Paganino got a bit ahead of me departing Autoport. Built in 2009 as CSAV Rio Tata, it was renamed last year when it was acquired by the legendary Laiesz Reederei of Rostock. 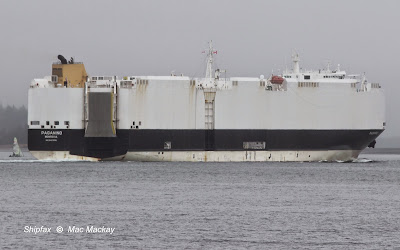 Paganino - not under sail, passes a boat that is.

A product of the Yangfan Group in Zhoushan the 47,020 grt, 11,4373 dwt ship now carries a name beginning with the letter "P" as have all the Laiesz ships, going back to the age of sail when the Flying P Line was world famous for its Cape Horners. While this ship perhaps does not have the elegance of one of those mighty square riggers, it does carry their colour scheme of white boot top, black hull and white "upper works".

A return visit from the impressive Disney Magic allowed for a comparison with its appearance before it was "reeimagineered" in 2013 by the Navantia shipyard in Cadiz, Spain. A 20 foot long "ducktail" to improve stability seems to be the only noticeable exterior sign of that work. The 1998 built ship's tonnage increased from 83,338 to 83,969 . The ship was built by Fincantieri's Breda yard in Marghera, with forepart built by the Ancona yard.Here are some befores and some afters. 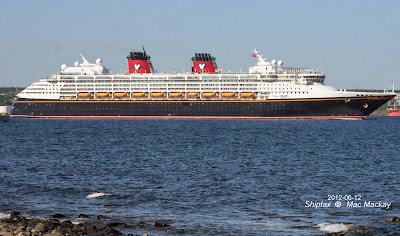 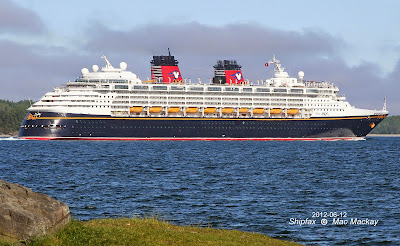 The attractive stern before (above) has been altered radically (below) by additional of the Donald Ducktail. 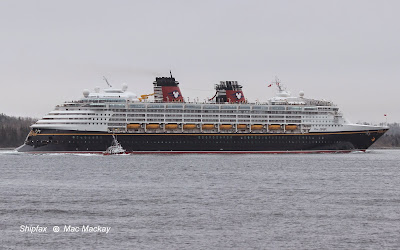 CCGC Sambro seen pacing Disney Magic outbound, had responded to a pleasure craft in trouble in the harbour, and was returning to base in Sambro. While crossing the Magic's wake, it met up with a few good breaking waves. 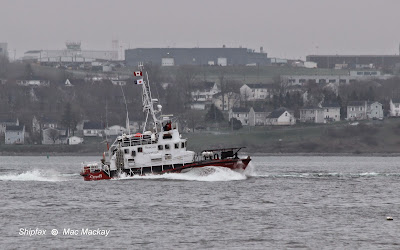 Meanwhile we did get a return visit from the herring fleet. 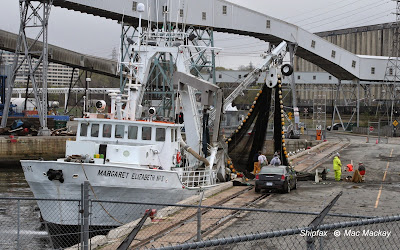 It was a highly nostalgic scene at pier 24 when Margaret Elizabeth No.1's crew set about mending their seine net. Usually the net is stowed on deck, and it is difficult to imagine its size. Some hint of that, and how the net is hauled using power blocks and its boom, can be imagined. The stainless steel chute for pumping the fish is mounted just abaft the bridge. 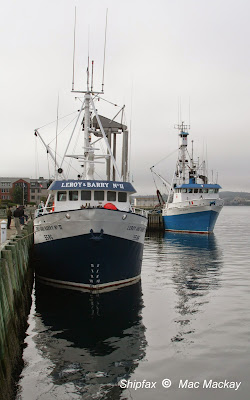 Meanwhile Leroy and Barry II was taking fuel at the Tall Ship Quay while Lady Melissa idled at Bishop's Landing.
Posted by Mac at 8:45 PM