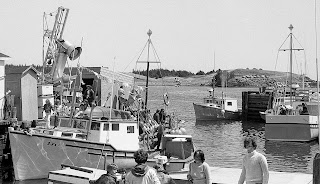 Why this picture? - see the end of this post.

News that the wreck of the Miner (ex Canadian Miner) on Scatarie Island is nearly cleaned up, but is now stalled until after lobster season, is mostly good news. It means that much of the visible debris is now stockpiled on shore, but debris that is underwater, or mostly underwater (like the fourth engine) has still not been cleaned up.
http://www.cbc.ca/news/canada/nova-scotia/mv-miner-wreck-removal-from-scatarie-island-almost-done-1.2928232

To avoid conflicts with lobsters, lobster fishers and their gear, work has apparently been temporarily suspended. When it resumes and is finally completed, then the Province of Nova Scotia will go after Ottawa to kick in some funds. Good timing - likely in the middle of a federal election campaign!
[See the end of this piece for a bit of nostalgia]

The old $15 million estimate is out of date because more pollutants were found during the clean up.

Not only should Ottawa contribute to the fund, but they should pay for it all due their tardiness in signing on to two international conventions that would have helped to prevent such an occurrence.

The first of the two conventions is the Nairobi International Convention for the removal of wrecks. This convention has now come into force for a handful of nations that have signed on. Canada (and the US) are notable for their absence from the list that does include Germany, India, Britain and a handful of smaller states. It would force shipowners to provide proof of insurance to clean up wrecks in the the economic zones of signatory states. Ships registered in signatory states would have to provide proof of insurance. If not registered in one of those states, they would have to provide proof through another state.
As with most marine insurance there is a a limitation of liability, but even so, this would be a tremendous asset to a country like Canada with a huge coastline and sensitive environment. Canada has been dragging its feet on this one through: [pick one] sheer indolence, bureaucratic red tape or lack of political will.
Transport Canada proposed signing on in 2010 - so why haven't we signed on yet?

The second convention is the Hong Kong Convention on Ship Recycling. This is an even farther reaching scheme where ships will require a hazardous materials inventory. It will set up rules for safety of shipbreaking facilities and an enforcement regime. This convention needs 15 states with 40% of the world's tonnage to ratify, so Canada will not be instrumental one way of the other in getting it off the ground. However Canada should be ready to go when it does come into force. What it would do effectively, is to force Canada to recycle more of its own old ships domestically rather then exporting our pollution to third world countries.
Why can't Canada sign on, get its house in order and be ready when the time comes?

Just so I don't sound too crabby about this, there was one good sign last fall when an old US Great Lakes ship, American Fortitude was denied permission to transit the St.Lawrence Seaway en route to a scrap yard in Brownsville, TX. Canadian authorities deemed it too late in the season for such a tow, and that the risk of another Miner grounding was high. Good call.

American Fortitude, a once noble ship was turned back to US waters, wintered in Oswego, NY and this week left under tow for Port Colborne, ON where it will likely be broken up by Canadian scrappers.

Meanwhile several Canadian or ex Canadian ships are lying in Montreal and other ports, waiting to go for scrap. One of them, featured here before, the former Montrealais, has already been renamed Mont and will likely be on the end of a tow wire for Turkey in the next few months. It will likely be uninsured and collective fingers will remain firmly crossed until it exits Canadian waters.Had Canada signed on to the Nairobi Convention, the owners would be required to provide proof of insurance, or post a bond or have the ship scrapped in Canada.

Here's why there is concern about the Miner wreck. This is a series of photos taken May 22, 1982 at the blessing of the fleet in Main-à-Dieu, NS. The nearest community to the Miner wreck, it is perched on the very edge of the continent and is a barren but beautiful place. It is much diminished today, but still depends on the sea for its livelihood. As you will see, every man and his dog turned out for the annual event that marked the opening of the lobster season.

All the lobster boats were freshly painted and ready for the season to begin. 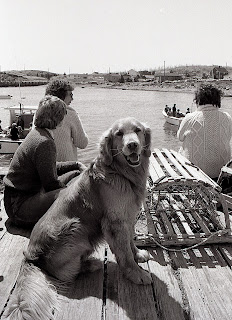 Men, women, children and dogs attended the annual event. Fishermen still used traditional wooden traps (tourists had not yet taken them all home on the roofs of their cars.)

The village is perched above the beach, backed up by scrubby trees that had been burned over by a fire in 1976 that destroyed the church. 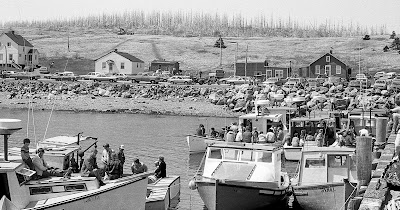 It was a family day, and some of the boats were crowded. 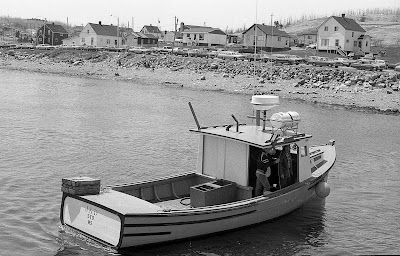 All the boats were spotlessly clean, and had only been back in the water for a few hours or days. 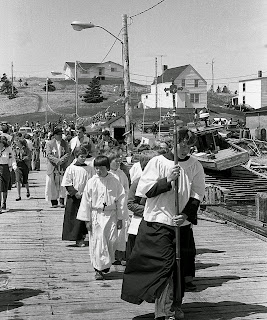 A priestly procession makes it way the length of the wharf.

Midst much roaring of engines, boats jockey for position. 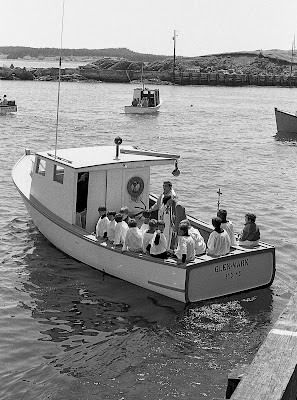 Priests and acolytes aboard the Glen-Mark to perform the blessing of the fleet.

Boats process past the anchored Glen-Mark for the blessing. When they return they will begin the hard work of loading the boats with traps for the opening day of the season.