It was not just bagged flour for Cuba that ships of the USSR loaded in Halifax. There was also bulk grain. As one of the world's largest grain producers, the USSR's crops were mostly centred on the Ukraine, and when there was a crop failure or a shortage, imports became essential. For many years the USSR was Canada's largest grain customer. Before the rates for shipping grain by rail were revised (the infamous Crow Rate), Halifax was one of the many eastern grain ports that shipped to Russia.
In the winter of 1984 seven USSR and two Polish ships loaded in Halifax between January and April when St.Lawrence ports were accessible only by ice class ships.
As always the USSR ships were a mixed bag of classes, and several foreign built ships as well. A chronological sampling: 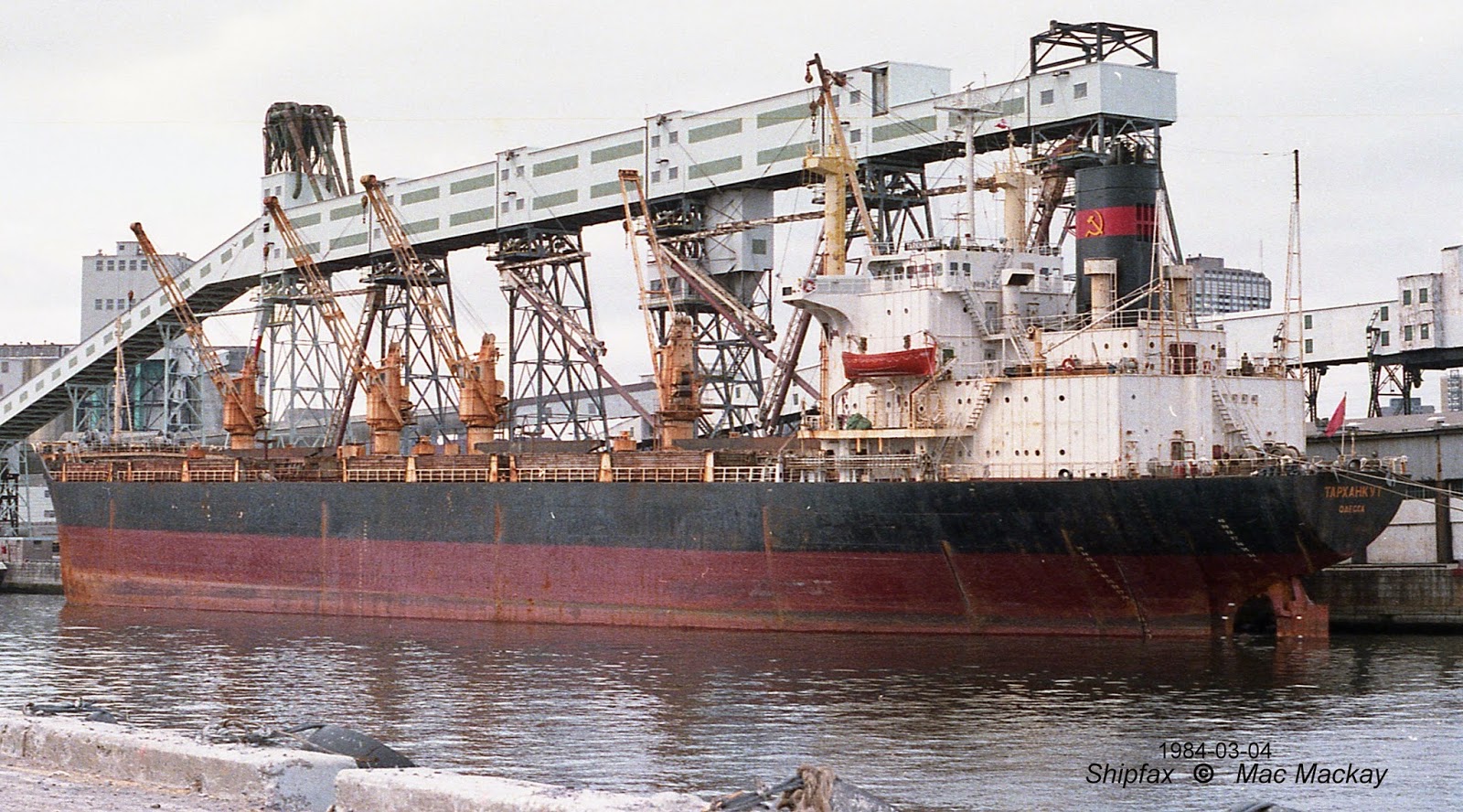 Ready to load grain at pier 28, Tarkhankut was high out of the water. Note it has no plimsoll mark or load lines.

Two cranes are swing out to allow the grain spout to fill in the last few bushels. The ship carried two sampson posts for derricks, they were removed between 1984 and 1987, and the posts were painted out in white.

Tarkhankut was built as Maritime Dominion by Osaka Zosen in 1971 for Venus Shipping Corp of Liberia. It was 15,912 grt and 26,720 dwt and was acquired by the Black Sea Shipping Co in 1983. It carried four 8 tonne cranes and one 15 ton derrick.The ship only lasted until July 1987 when it arrived in an unnamed Chinese port for scrapping. 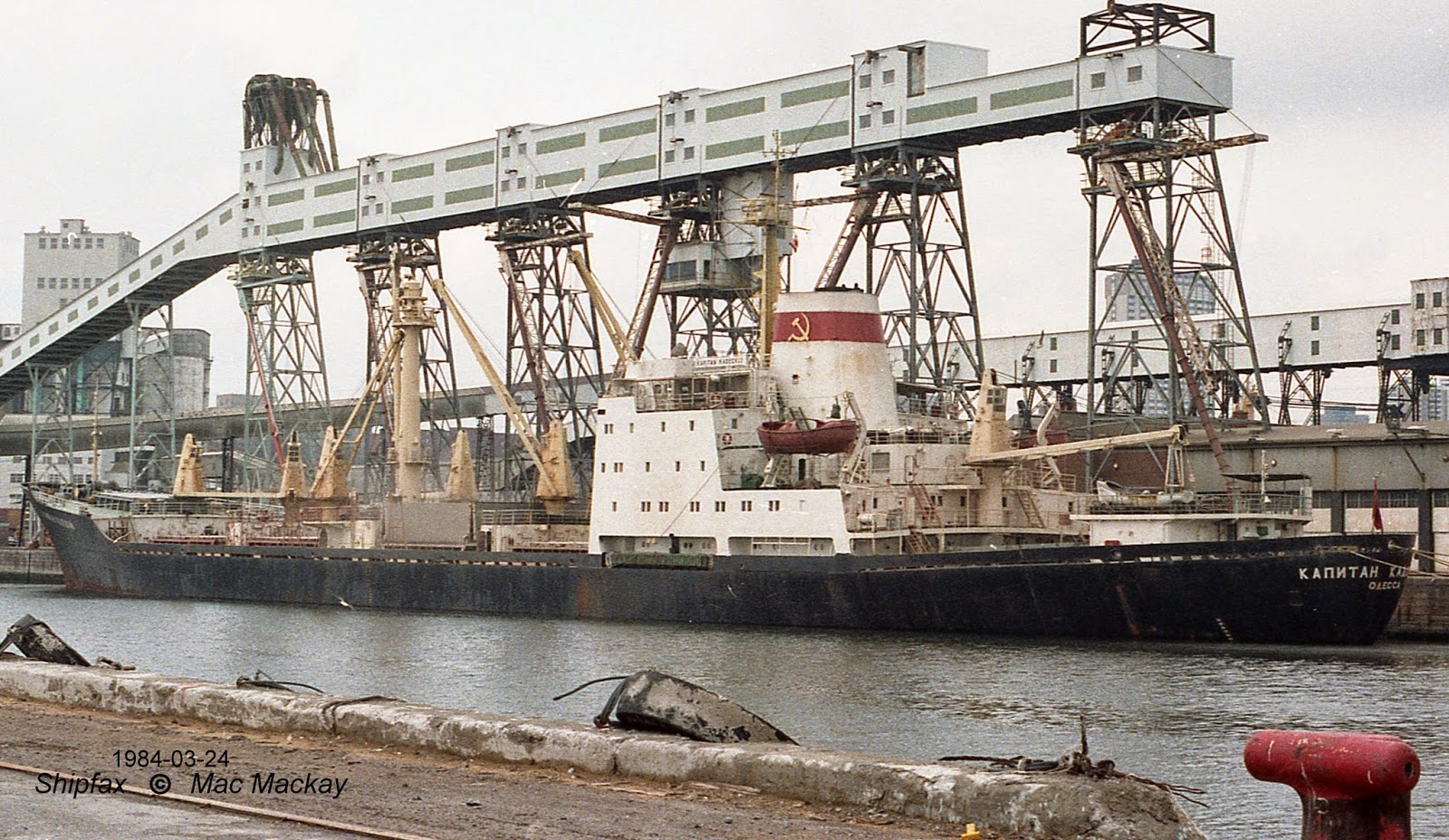 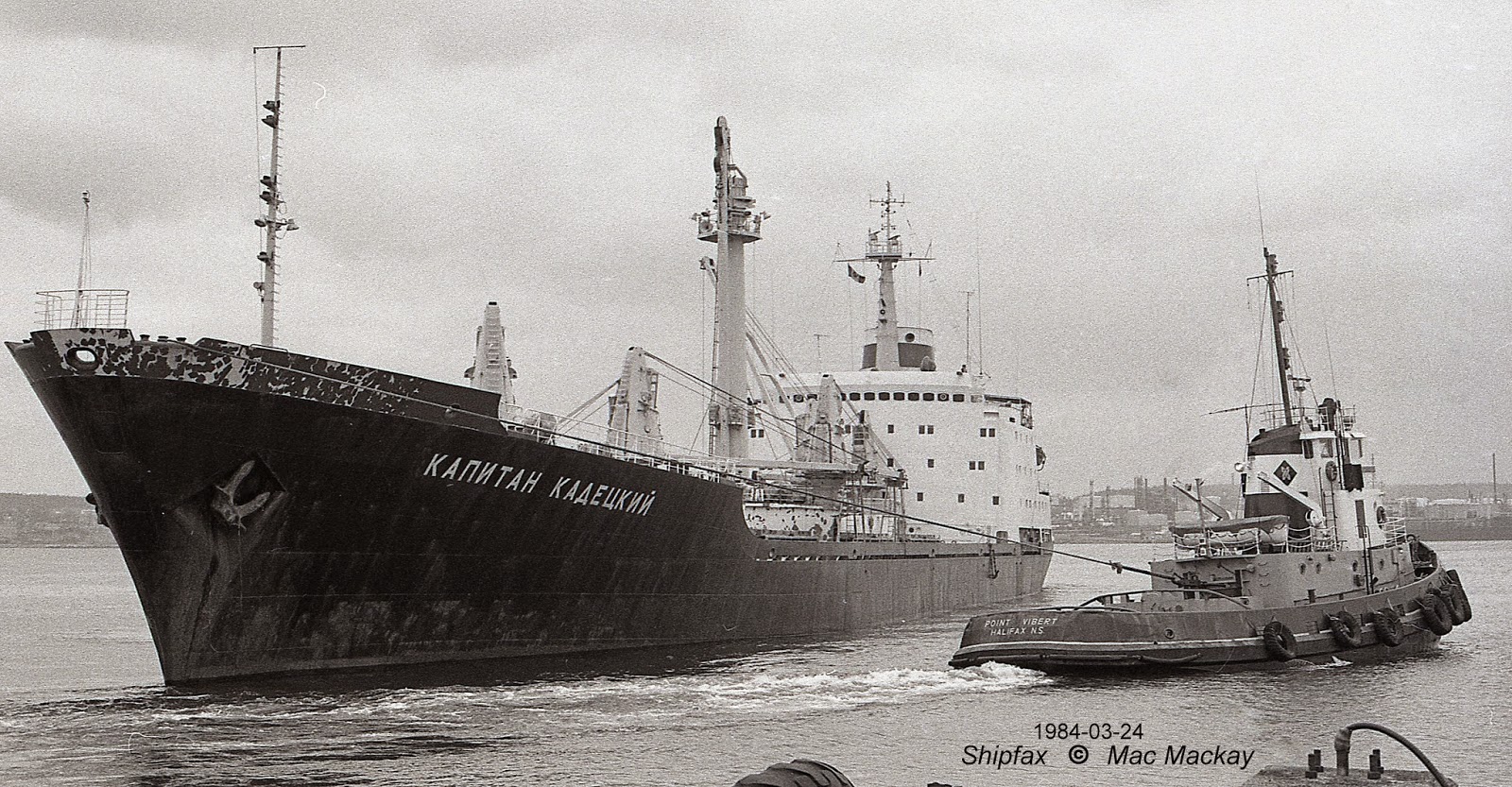 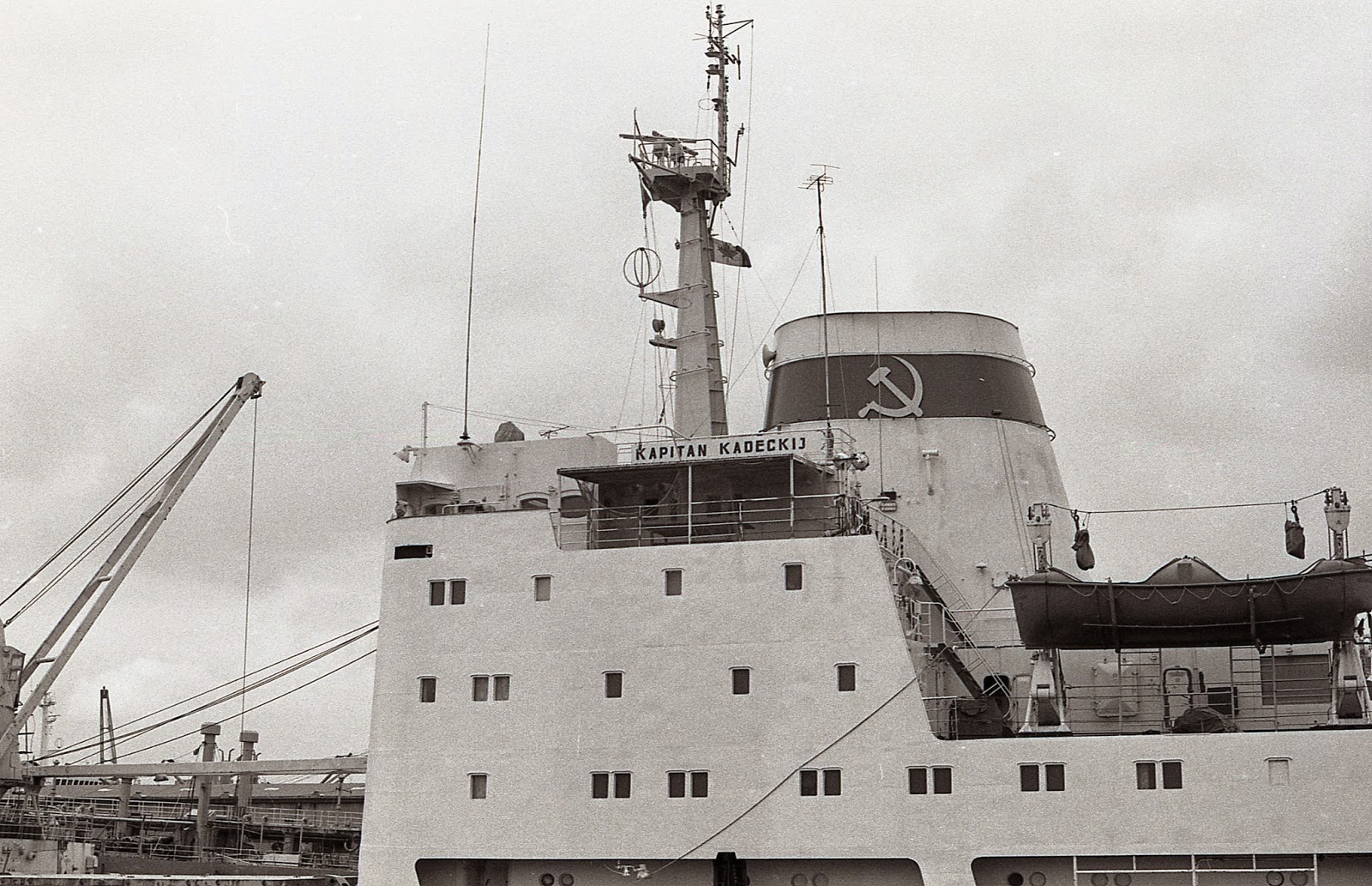 The ship's massive funnel bears the hammer and sickle of the USSR. It also carries a pingpong table under an awning on the bridge. A windage allowance would be an important consideration if playing at sea.

One of the handsomest ships to load grain, was the general cargo ship Kapitan Kadetskiy. One of eleven ships in its class, it came form the Chernomorskiy works in Nikolayev, Ukraine, in 1972. Measuring 11,278 grt, 16,617 dwt, it was a big ship, with flaring bow and massive funnel. Its Bryansk-B+W engine was rated at 12,000 bhp giving the ship 18 knots. It was also ice strengthened and carried seven 8 tonne cranes and a 60 tonne derrick. It was delivered to the breakers at Alang March 8, 1997.

Elton was an odd looking little bulker, built in Japan in 1969 by Usuki Tekkosho in Saiki. At 9,755 grt, 15,966 dwt it has a surprisingly large capacity. Built as Fountainhead for Liberian owners, is became Nego Empress in 1973 and was owned by Asia Log Carriers (Lauan) Inc for time, before lack Sea Shipping Co acquired it in 1976. As Elton it loaded in Halifax several times over the years, until it was sold in 1987 to Volcano Shipping Co Ltd of Honduras as Ekaterini B, then in 1991 as Summit Pioneer for Cyprus flag owners. It arrived in Gadani Beach December 23, 1994. 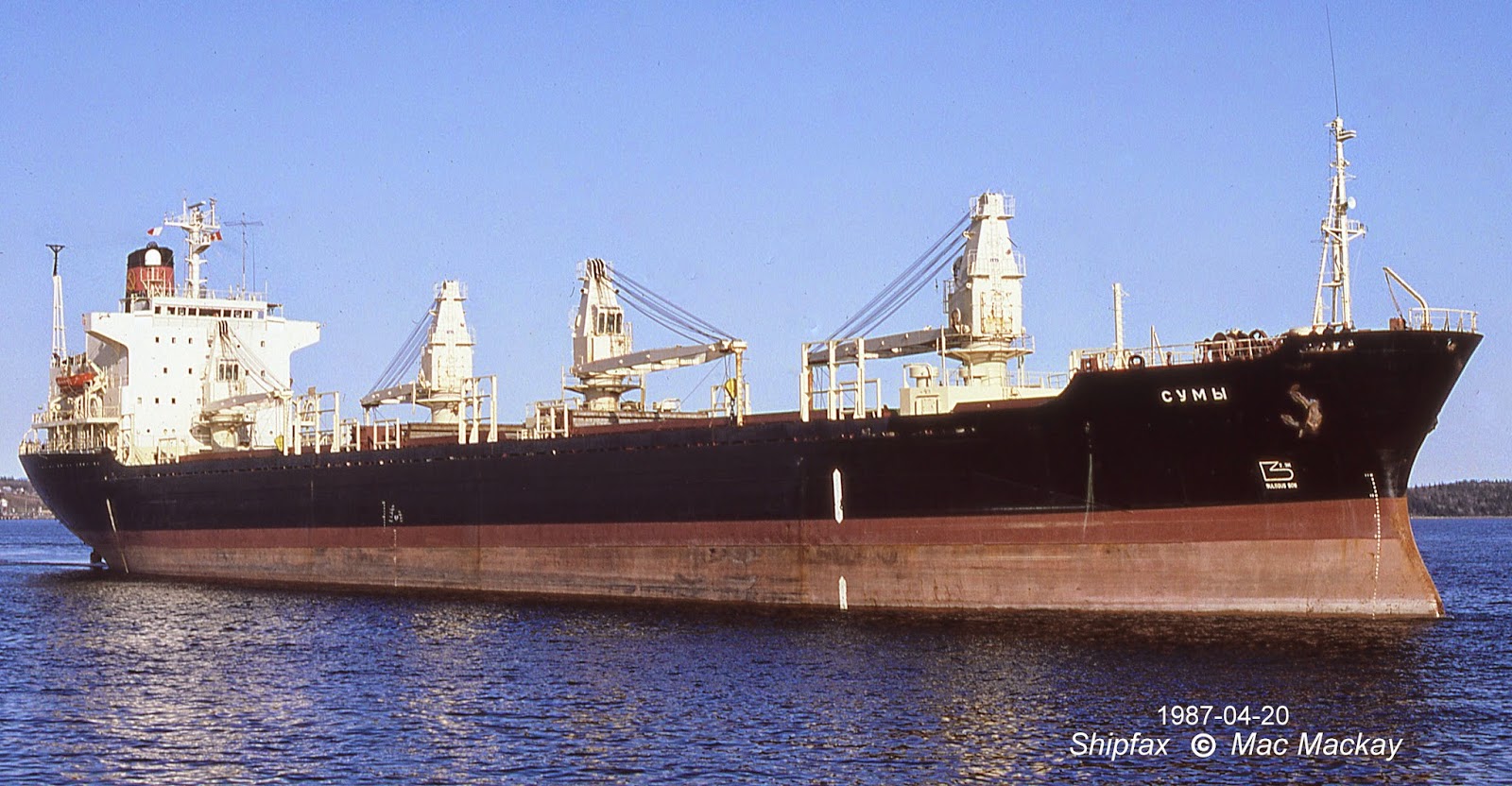 Sumy arrives in ballast, with white stripes above and below the boot topping to mark bulkheads where it was safe for tugs to push. It also carries a warning symbol for a 2m projecting bulbous bow, and type of plimsoll mark and load line assigned by Russian classification. 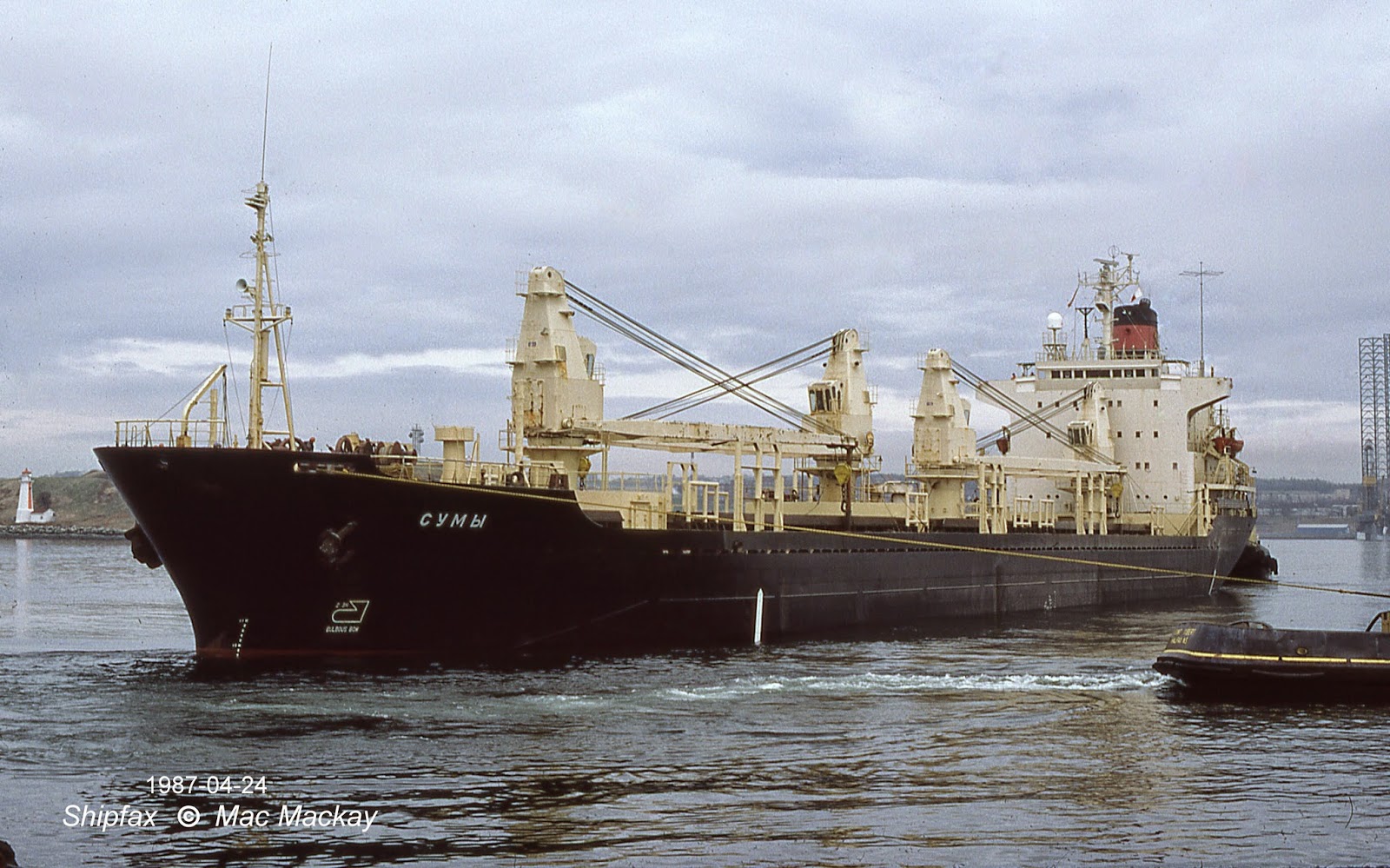 Sailing loaded the ship appears to have a reasonable freeboard for winter.

Sumy started out as Ikan Belanek for Singapore owners when it was built in 1978 by Osaka Zosensho. The USSR's Azov Shipping Co bought the ship in 1986. It measured 13,347 grt, 22,904 dwt. It had a longer tenure under the hammer and sickle (it was still carrying that symbol in November 1992 , nearly a year after the break up of the USSR), arriving in Alang November 4, 2009. It was beached November 18 and broken up.