Canada Steamship Lines and its affiliate CSL International  have a large fleet of self-unloading ships to carry a variety of bulk cargoes. Today there were two CSL ships in Halifax, one from each side of the equation. 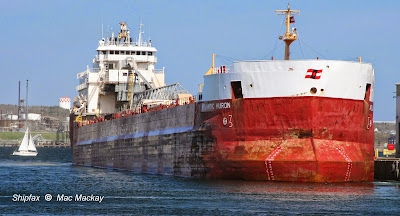 Atlantic Huron backs away from pier 26, and despite sounding its horn, at least two pleasure craft dared to cross the ship's track.

Atlantic Huron, a member of the domestic fleet, completed unloading a cargo of grain (likely corn) and sailed for Lower Cove, Newfoundland. Located on the Port au Port Peninsula, Lower Cove is the shipping point for Atlantic Minerals Ltd, a large producer of limestone and dolomite, essential ingredients in steel and cement making and other industries. Two links will provide some idea of the vast scale of reserves in the area.
http://www.atlanticminerals.com/AMLProf.htm
http://www.canadianminingjournal.com/news/lower-cove/1002141112/

Despite the ship's somewhat rugged appearance, it has freshly painted white forecastle, and the flat sides down to the belt line. The tapered portions of bow and stern are next. The red hull colour is traditional for CSL's domestic fleet.

CSL Tacoma, as a member of the international fleet CSL Americas, has a black hull. It has just boarded its pilot and is working its way in.

Inbound was CSL Tacoma (the ships passed each other out beyond the pilot station), heading to National Gyspum to load a cargo for the USA. It arrived in ballast from the Norfolk area, which is unusual - the ship often delivers coal to Caper Breton, and also loads aggregates there. It is one of the new series of ships built in China for CSL called the Trillium class.

CSL Tacoma was keeping to the east side of the channel, to give room for the outbound Maersk Penang.

With pilot aboard, Maersk Penang makes its way to the pilot disembarking area, about a mile or so farther out.

Once clear of the outbound ship, the CSL Tacoma has the channel to itself.