I have been carping over the years about the process for naming ships and the often insipid names selected. The present government's penchant for naming ships has seemed mostly self-serving to me and not respectful of tradition- particularly naming naval ships after people- no matter how heroic they may have been.

The new Digby to Saint John ferry has been named Fundy Rose, a name which, on the face of it, certainly fails to capture the imagination, nor stir the soul.

This unfortunately detracts from the motivation for naming the ship, which is quite laudable. The "Rose" portion of the name commemorates Rose Fortune, who was born into slavery, settled with her family in Annapolis Royal and went on the become a businesswoman and the first female police constable in Canada. Her descendants still live in the area and have also made notable achievements. Rose Fortune is certainly as worthy a candidate as any to have a ship named for her. However some names just don't lend themselves to the occasion.

The "Fundy" prefix is obvious, but if one is to remember an important person why modify or diminish their name? Would not Rose Fortune have been a suitable enough name for the ship? Who will learn the story of Rose Fortune because of this ship? Some percentage of the passengers may trouble to look at a plaque or display on board. Others may read of it in a publicity brochure. Most will miss the point completely. A rose is a rose is a rose.

On balance I guess the name choice is satisfactory, but the selection committee has missed an opportunity to make a bolder statement.

Step two is to emblazon the name on the ship. Seeing the beautifully rendered former name of the ship burned off, was sad, because the new name will likely be formed of uniform, Helvetica (sans serif) letters, welded on and painted white - ho hum. [There is no law that says a ship's name has to be boring looking too!] 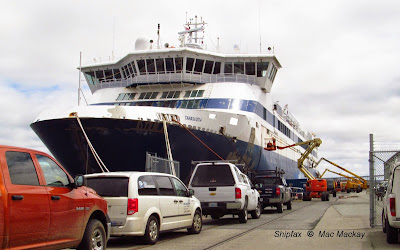 Tremendous activity surrounds the now officially re-named ferry at pier 9B, even though its new name has not appeared on the ship yet. Even if there is only one workman per vehicle, that would amount to 50 workers, but the number is probably much higher.