The officially renamed Fundy Rose was turned at Pier 9B this afternoon. The ship's port side has been repainted from the shoreside after the installation of new liferaft launching equipment. It will now be the turn for portions of the starboard side. 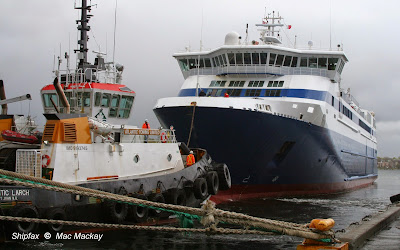 Fundy Rose comes off the pier, showing the 'blisters" on the hull for the liferaft system.

The ship's former name, Blue Star Ithaki will be burned off bow and stern and the liferaft gear will be installed before repainting. Sadly it appears that the ship's new name will only be painted on - no steel letters welded on. Also yet to come will be the Bay Ferries logo.

The ship is still carrying the temporary name Canada 2014 on its starboard bow and stern, and the old liferaft system.

The ship did not use its own engines for the move, but did have a working bow thruster, and the tugs Atlantic Larch and Atlantic Willow provided the power. The ships auxiliary engines were also running to to provide power to the mooring winches. 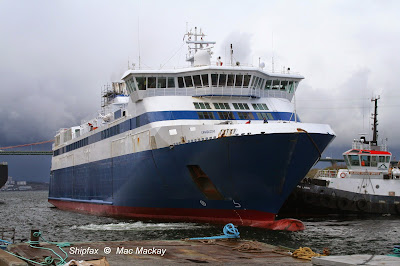 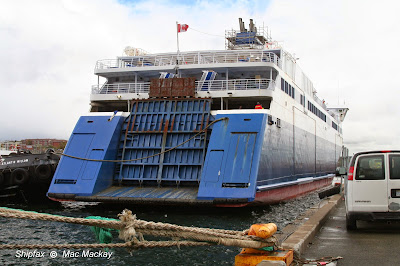 Now bow south, the ship is nearly back alongside. 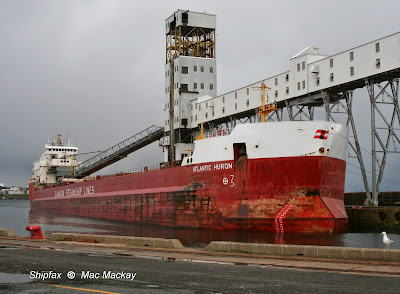 At pier 26, Atlantic Huron was unloading the first grain cargo of the season since the St.Lawrence Seaway opened. The veteran self-unloader has been an off and on visitor with grain and to load gypsum for many years. 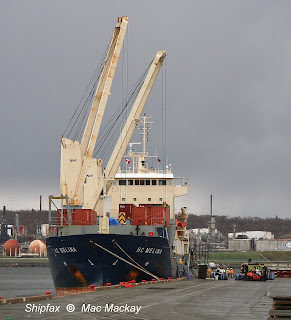 Forklifts haul away the cargo of bagged nickel concentrate.

Meanwhile at the other deepwater piers, there was more activity. HC Melina at pier 31 was unloading bagged nickel concentrate from Cuba for Nirint Shipping. A newcomer to Halifax, the ship was built in 2011 as Flinterschelde by Ben Kien Shipyard in Haiphong, Viet Nam. It joined IMM Shipping of Germany in 2011 and took its present name. The ship measures 6577 grt, 9120 dwt, has a capacity of 505 TEU and carries a pair of 80 tonne cranes that can work in combination for 160 tonne lifts. 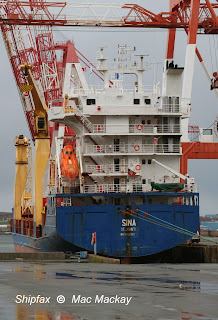 This time it appears to be in ballast, with no cargo. Melfi had Helene J. here on Tuesday, so there may not be much cargo for this ship. In any event it is not scheduled to sail until May 27. 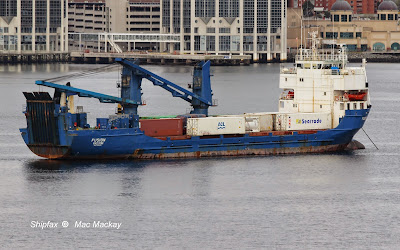 Fusion has its pilot aboard and is about to weigh anchor.


Yesterday pier 36 was occupied by Fusion on its regular St-Pierre et Miquelon run. It went to anchor overnight and sailed this morning. 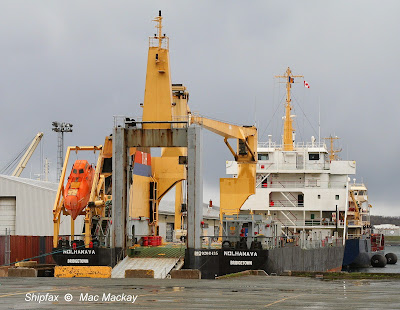 Nolhanava in the foreground, with Algoma Dartmouth at pier 33 in the background.

Meanwhile its replacement Nolhanava ex Shamrock is still at pier 34, with some maintenance work going on, but no indication of when it will actually go into service. It still carries the Thien and Hyenga funnel markings of its previous managers. I expect that to change, and its name too, before it enters service.