My usual Saturday round up was somewhat compromised by early morning fog, which meant that I again missed Courageous Ace (actually the fog had burned off when it sailed and had I been in the right place I might have got a shot).
The first arrival that loomed through the fog was the herring seiner Lady Janice II  arriving to unload its catch. 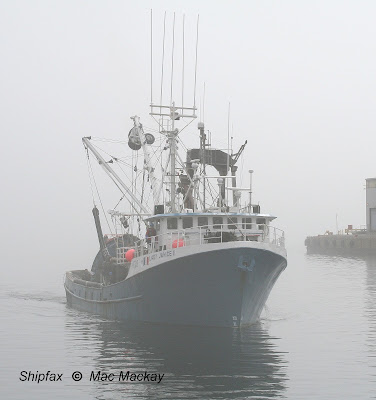 It was built in 1970 in Pictou as Sealife No.1, and was renamed Mari-Lynne Anita until 2001 when it was renamed Lady Janice II by Comeau's Seafoods. 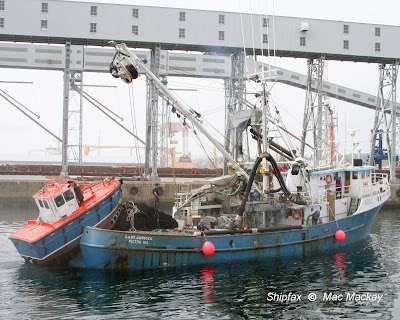 It was followed by the Silver Harvester I, causing a major traffic jam at pier 24 where Lady Melissa, Leroy and Barry II and Margaret Elizabeth No.1 were also unloading. The traffic jam extended to the dock where a dozen trucks were waiting to load, and on the pier face where the boats were "bumper to bumper". 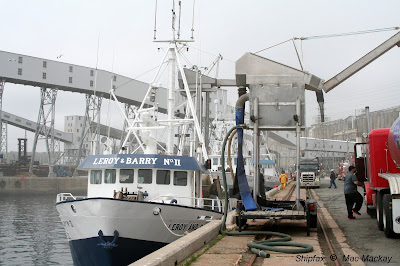 The last two boats had originally intended to unload at Sheet Harbour, but in view of inclement weather predicted they wanted to lay over in Halifax rather than the somewhat quieter port of Sheet Harbour. 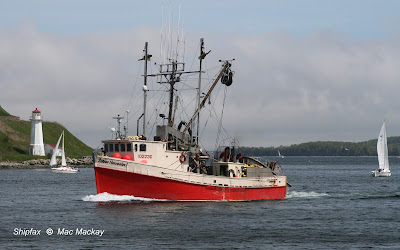 By the time Silver Harvester I had unloaded, things had cleared off wonderfully and the boat had to dodge sailors all they way up the harbour. Built in 1990 by Snyders in Dayspring, NS, it is one of the few remaining large wooden fishing vessels that we see. 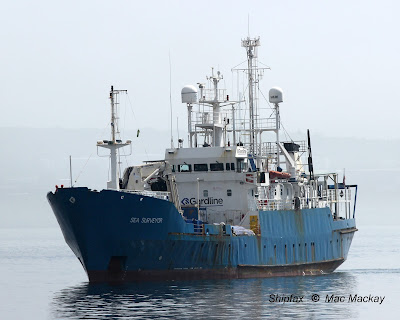 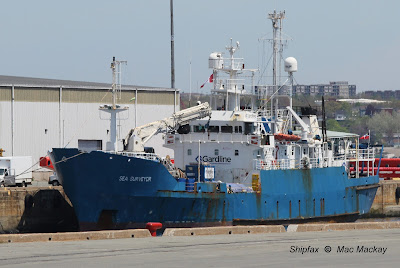 But first, the research ship Sea Surveyor arrived at pier 27. It was also fog bound all the way in, but there was brilliant sunshine above. It is something of a relic, built in 1979 by Clelands Shipbuilding Co, Wallsend-on-Tyne, England. It began life as a degaussing vessel named Magnet and carried powerful generators to demagnitize or deperm naval ships, to make them less attractive targets to magnetic mines. In 1998 it was acquired by Gardline Surveys and converted for geotechnical survey work. 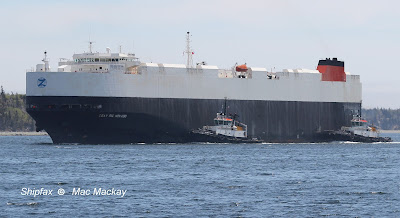 CSAV Rio Nevado arrived as the fog had cleared off most of the harbour. The 46,800 grt, 12,322 dwt car carrier was built in 2007 by Xiamen Shipbuilding Industry Co in China for Zodiac Maritime of London. It operates for Compagnia Sud Americana de Vapores, a major container, reefer and auto shipping copmany based in Valparaiso, Chile.

By afternoon with the fog well cleared off the next arrival was CSL's Rt. Hon. Paul E. Martin. Dating from 2012, it was the first of CSL's deep sea Trillium class of modern self-unloaders. Built by Chengxi Shipyard, Jiangyin City, it measures 43,691 grt, 71,406 dwt . In February 2014 it experienced a crankshaft problem and was laid up in Point Tupper and then in Shelburne for many months until it could be repaired. Since then it has operated with frequent visits to Cape Breton in coal or aggregates work.
It tied up at pier 30-31 for maintenance. 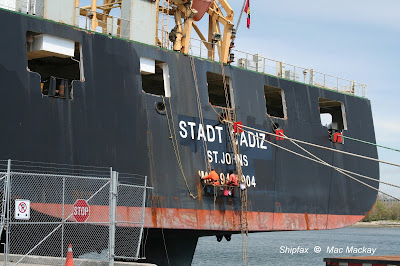 Meanwhile the rest of the harbour enjoyed sunny warm conditions, but no ship movements. At pier 9B North the idle crew of Stadt Cadiz (also Chinese built and in port with engine trouble since May 6) decided to do a little painting. It is rare to see this kind of overside work since most ships are not in port long enough to take it on. Painting was also in full swing on Fundy Rose at Pier 9B South, but at Pier 9C the crew of Harefield (in since March 19) had knocked off painting for the week, having worked their way along the hatch coaming from the bow, about half the way aft. 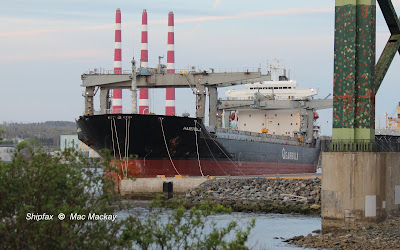 May 25 photo, Harefield at the extreme north end of Pier 9C, almost under the MacKay bridge, has been in port since March for rudder repairs, and now sports some new paint on the hatch coaming.