Maersk's grueling North Atlantic service to Canada has claimed another victim. The four ship service which sees weekly calls in Montreal and Halifax, was originally operated with Maersk ships only. Partner CMA/CGM was obliged to provide one ship starting last year. The first ship they placed on the route, CMA/CGM Montreal had a breakdown even before it began to operate, and caused delays. Continued problems with the ship resulted in it being replaced.

Meanwhile when Maersk Pembroke was scheduled for drydocking, it was replaced on one trip by Quadriga. That ship, although only a temporary replacement, could not meet the schedule and caused further delays. See:
http://shipfax.blogspot.ca/2015/04/quadriga-back-again.html 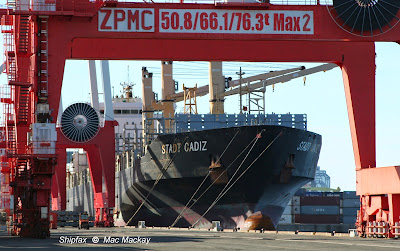 With most of the boxes unloaded, Stadt Cadiz rides high in the water.

CMA/CGM's replacement for CMA/CGM Montreal, was the odd choice of Stadt Cadiz, a geared container ship, not the type one would expect on an express service such as the North Atlantic. It was days late arriving in Montreal on its first trip, then took an inordinately long time to reach Halifax due to engine trouble.
On arrival in Halifax Tuesday May 5 (instead of the scheduled Saturday) it was found to need major engine repairs and has been taken off the service, and all its 1,000 containers have been offloaded at Halterm, and the ship will move tonight to Pier 9B for repairs. 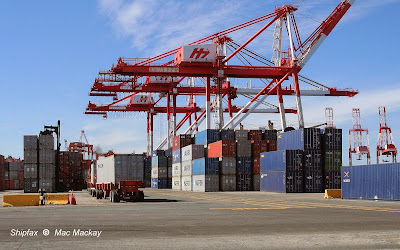 Stackers working in tandem, and at times three cranes working all day unloaded Stadt Cadiz. The boxes are in an area that is reserved for outbound containers (there is no rail siding.)

Now we have the prospect of the next Maersk ship on the run, Maersk Palermo arriving in Halifax from Montreal  tomorrow on schedule and trying to load as much of the Stadt Cadiz cargo as it can, plus its own cargo, but leaving a lot behind, which will have to be carried by another ship.

Maersk Pembroke, which is due in Montreal on Monday is back in service, but it is unlikely that it could divert to Halifax and forego Montreal. The cost of railing its cargo from here on would be exorbitsnt, but we will have to see what happens with next week's ship.

The North Atlantic is noted as one of the toughest liner routes in the world, and maintaining a weekly schedule with only four ships is a considerable challenge even if the ships are in peak condition. (ACL uses five ships, but has more stops on both sides of the Atlantic and is equally gruelling.)

With container lines cutting rates to the bone, and shedding ships, there is still lots of work for first class ships. The utilization rates for second grade ships is lower as they come off charters, and are the only ships available on short notice or for short term, so more pain may be expected.

As one of the few profitable shipping lines in the world, Maersk must be gnashing its teeth over this episode, which is not of their doing.