A Tale of Two Cities

Maybe a better title would have been Two Tales of One City.

Over the years many ships have carried the name of Canada's largest city, Toronto. These have included naval vessels, passenger ships and bulk carriers. Today April 30 saw the current HMCS Toronto FFH 333 put out to sea. It has been noted for the past several days operating in local areas. 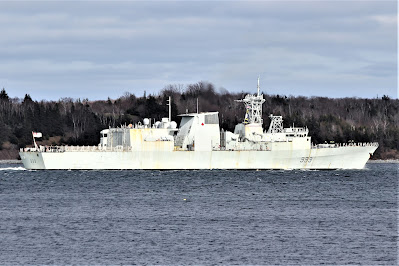 Built by Saint John Shipbuilding, it was launched December 19, 1990 and commissioned July 29, 1993. It is the second HMCS Toronto. The first, K538 was built by Davie Shipbuilding and Repair in Lauzon, QC in 1943 and was commissioned in 1944. It saw active duty in World War II, was upgraded and recommissioned in the 1950. In 1956 it was loaned, then sold in 1959 to the Royal Norwegian Navy as HMNoS Garm. Renamed HMNoS Valkyrien in 1965 it was broken up for scrap in 1977.

Arriving not long after was CSL Tarantau, a self-unloading bulk carrier, which uses an archaic form of the city's spelling. It is also the second CSL ship to use this spelling in its name - the first was a "Laker",  named simply Tarantau. Built by Collingwood Shipbuilding in 1964 it was a self-unloader, measuring 712' x75', and had its wheelhouse forward and was steam turbine driven. It was laid up in 1966 and broken up in 2000. 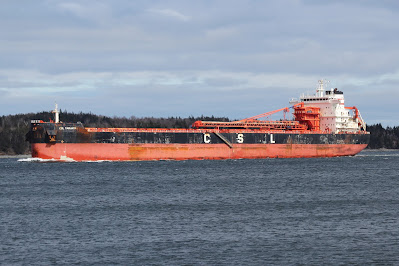 The current holder of the name was built by Chengxi Shipyard in Jiangyin, China as one of five Panamax Trillium class self-unloaders. Three were built for CSL and two for Torvald Klaveness, and all were for operation in the CSL International Pool. When Klaveness decided to leave the pool in 2016 they sold Balchen to Algoma as Algoma Vision, and this ship, which was built as the Balto went to CSL where it became CSL Tarantau. Both ships continue to work in the CSL pool. It is a 43,691 gt, 71,279 dwt ship which carries aggregates, coal, and gypsum. The orange paint on the self-unloading gear is a carryover from the Klaveness colour scheme, which used the same colour for the hull paint. This is a 2015 view:

The name "Toronto" may be derived from the Mohawk "Tkaronto" meaning "where there are trees near the water" or the Wyandot word for plenty, or perhaps even "Taranto" - meaning "narrows". It is also thought that "Tarantou" or "Tarantau" originally applied to the area betweenLake Simcoe, and Lake Ontario which was a traditional meeting place. The City took the name to replace the previous name of York or Fort York, applied by British colonists. It has also had numerous nicknames, most of which were not flattering and do not need to be repated here.