Mist, wind and rain again, (April showers, etc.,...) did not deter shipping activity in the harbour with several arrivals and departures today (April 8).

At Fairview Cove it was Conti Contessa on THE Alliance's EC5 service. The ship arrived early yesterday morning (April 7) and sailed early this afternoon, with some mist in the air. 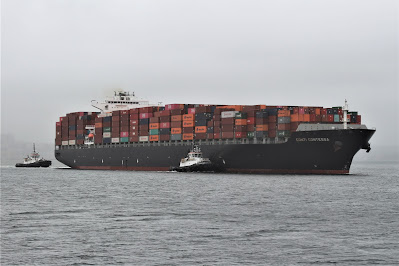 Built in 2006 by Samsung Koje, the 90,449 gt, 101,007 dwt ship has a capacity of 8084 TEU including 700 reefers. Initially named ITAL Contessa, it took its current name in 2019 for owners Niederelbe Schiffahrts. There was a very brisk breeze blowing on the ship as it headed for the Narrows, and the stern escort tug was working hard. Once into the Narrows, things were a little calmer, but the ship kept the all three tugs for the passage. 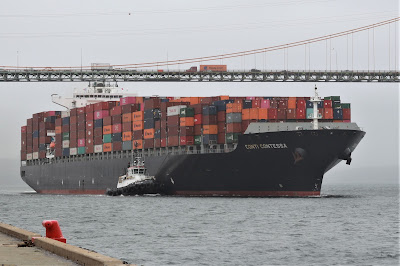 I've always wanted to catch a "did I miss the boat?" shot. A truck with a Hapag-Lloyd container hustles across the MacKay bridge toward Fairview Cove - after the ship has sailed.

At Fairview Cove, the rebranding has started. With the PSA takeover and a new multi-year lease, the "Ceres" sign was coming down. 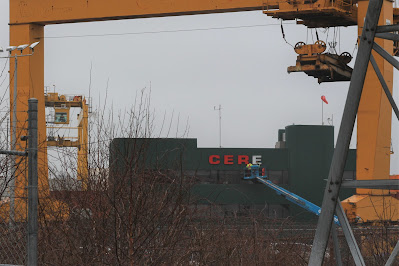 PSA rebranded the southend terminal when they took it over , but there are still a few remnants of "Halterm" if you look closely. Here's one I saw yesterday, looking a little worse for the wear: 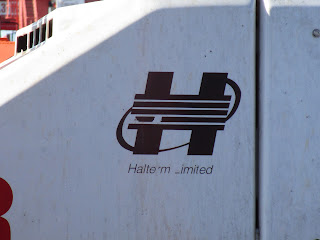 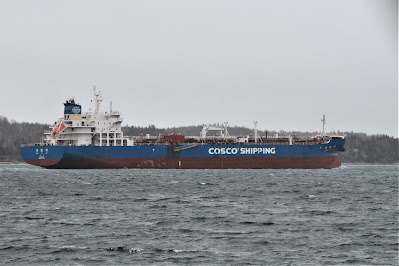 The ship took the western, deepwater channel to make room for the inbound MSC Annick.

Arriving from Montreal, to top up to sea going draft, the MSC Annick appears to be lightly loaded. As reported just about a year ago, the ship has been renamed eight times - see April 10, 2021 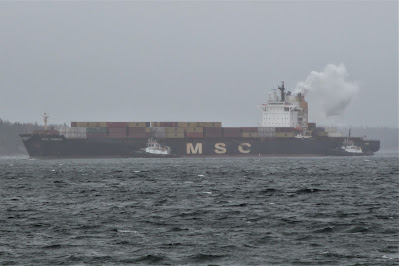 By the time the ship neared PSA's Atlantic Hub Pier 42, the mist had become driving drizzle. With the high humidity, the ship's vapour plume lingered for quite a while. This ship's exhaust gas scrubber was obviously working (see yesterday's post where I accused a ship of turning off its scrubber).

The MSC Annick also had to wait for the Zim Tarragona to clear the berth, so sailed on into the harbour, turning north of George's Island. I bailed out before that happened, so no photos of the second ship to turn around George's Island recently. (See March 30 for the auto carrier MSC Antigua.)