Horizon Maritime's former flagship Horizon Star has been renamed ADV Reliant by its new owners, the Australian government. ADV stands for Australian Defence Vessel - it will not use the Royal Australian Navy Ship (RANS) title. I assume this means that as a naval auxiliary vessel it will have a civilian crew, and will not be commissioned as a naval vessel. It may also be unarmed. 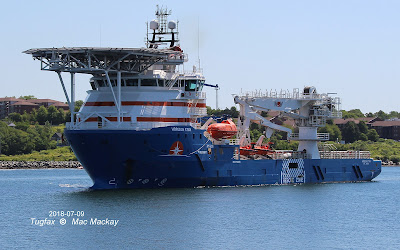 Built in 2017 by Kleven, Ulsteinvik, Norway, the state of the art offshore support vessel was sold for USD$ 67 million and is en route from the Netherlands to Las Palmas for refit. Horizon looks to make a substantial profit on the sale since they bought the ship at a distressed price. The original owners apparently cancelled the order and the shipyard sold the ship to recoup losses.

The Australian government had considered building a new "Pacific Support Vessel" but like many governments (such as Canada's) it found that buying "used" made more sense than paying the astronomical costs to build domestically. The ship will be based in Brisbane and will be standing by to respond with humanitarian aid and disaster relief, supplementing the navy's amphibious craft which are based in Sydney.

St.John's based Horizon Maritime used the ship to support oil and gas exploration off Nova Scotia in 2018, but that work dried up and it was assigned to the North Sea. It also supported the salvage operations on the Yantian Express fire in 2019.

Horizon still has four ships in its stable. Horizon Enabler, Horizon Arctic and K.J.Gardner (the former Siem Commander - quietly acquired in 2021 from Secunda) all offshore support ships. The fourth is the icebreaker Polar Prince, the one time CCGS Sir Humphrey Gilbert. 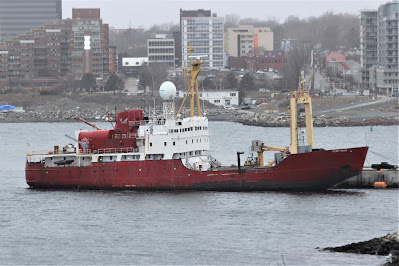 After wintering in Mulgrave this year, the Polar Prince is now docked at the C.O.V.E. pier in Dartmouth.