For a time this morning, April 12, two ships with Dutch connections were tied up at adjacent berths in Halifax. The first ship was flying the Dutch flag, and the second only had a Dutch crew.

First to arrive was the Scheldegracht, the multi-purpose and heavy lift ship, built in 2000 by Szczcinska in Poland, it is a 16,639 gt, 21,250 dwt vessel. It has portable tween decks and cranes of 120, 90 and 55 tonne capacity. The ship is equipped with side doors and elevators for forklift loading. 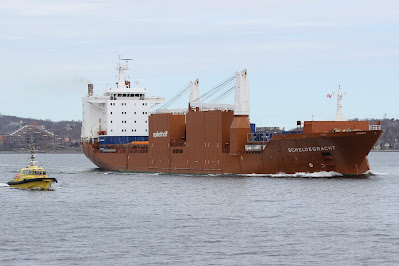 From the look of them I would say they are aircraft componenents, headed for Bombardier Aviation in Dorval, QC. Bombardier brings in fuselages, wings and tail assemblies from the former Short Brothers factory in Belfast, Northern Ireland.

Scheldegracht's owners Spliethoff, run a regular service to the Great Lakes in summer, but perhaps they did not want to make the trip all they way to Montreal this time. The cargo could be there tomorrow travelling by road, assuming permits and escort vehicles were in order. The ship was only in port a few hours before heading out to sea for Baltimore.

The second ship with a Dutch connection is actually a Norwegian ship (for the time being) but with the Dutch ship delivery company Redwise delivering the ship to Canadian owners.

The ship is the ferry Svanoy built in 1992 by Johan Drage in Rognan, Norway, and measuring 1639 gt. It has a capacity of 299 passengers and 89 cars on two levels. It is also double ended and in fact turned end for end while inbound this morning. 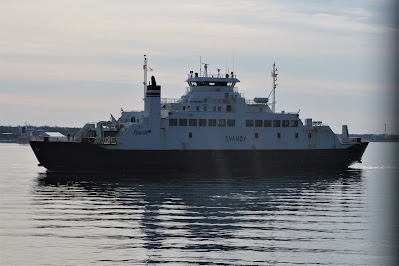 Moving northbound (right to left in the photo), passing Pier 20, the ship's funnel is forward, on the pert side. 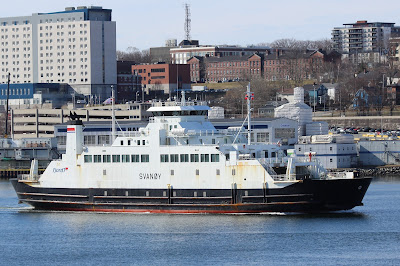 A few minutes later, still northbound,  but now moving left to right in the picture (taken from Dartmouth), the ship has turned end for end and the funnel is on the starboard side, aft. This will make for better visibility for docking at Pier 9B. 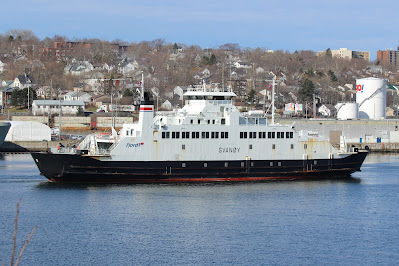 The Svanoy has visor type gates at both ends so that vehicles can drive straight through.

The Province of Quebec's ferry corporation La Société des Traversiers du Québec has chartered the ship for one year, with possible extensions, to serve the St-Joseph-de-la-Rive to Ile-aux-Coudres route while other ferries are in refit, and to serve as a back-up for other routes if needed. The Quebec company Logistec is the owner and it will be managing all aspects of the ship's operation. (It also operates several other ships for northern supply.) 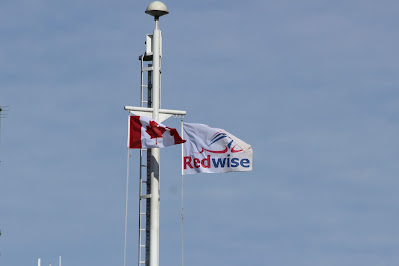 The Redwise flag flies above the ship's bridge. An acronym from the founding company Rederi Wijsmuller, the Redwise name is known worldwide for crewing and delivery services.

The ferry Svanoy will be managed by Logistec, but the Newfoundland firm Canship will be providing two captains and two engineers to actually run the ship. I assume that the seafarer's union will be providing crew members.