Nirint Shipping BV from the Netherlands is the long time operator of a container and general cargo service from Europe to Cuba. On the return leg from Cuba, Nirint ships stop in Halifax to unload nickel sulfide which is then sent out by rail to Fort Saskatchewan, Alberta for refining. Until now the nickel sulfide, shipped in bags, has been handled at Pier 30-31. The bags can be loaded directly to gondola cars or stored in the trasit shed before being loaded on the rail cars. Because the cargo is considered to be hazardous, the bags are stored indoors to avoid the dust being blown about.

The project to expand the southend container terminal is due to start May 1. Work will include filling in the camber south of Pier A-1, and demolition of the shed on Pier 31. Consequently Nirint is moving its operations to the adjacent Pier 27-28 where the nickel cargo can be stored in the last remaining transit shed in the deepwater piers section of the port. (There is also a transit shed at Pier 9C).

Nirint's Augusta Luna arrived April 27 and is the first to use Pier 27-28. It completed unloading its nickel cargo today, Friday April 29, sailed in misty conditions this evening. 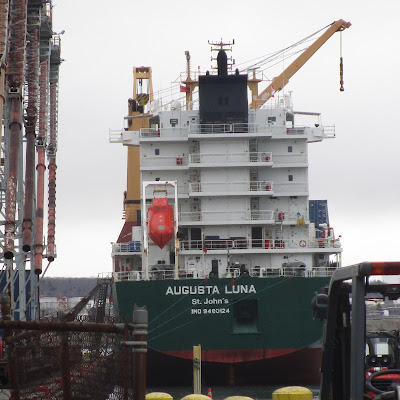 The ship is heemed in by various obstacles at Pier 27, so iis very hard to see.

Built in 2011 by Xinshun Shipyard Group in Yueqing, China, Augusta Luna is a 12,772 gt, 17,370 dwt ship with three cranes, two of 150 tonne capacity and one of 80 tonne capacity. It can carry about 900 TEU (698TEU if loaded to 14 tonnes) and has 60 reefer plugs. Built as Rickmers Yokohama it was renamed Lolland in 2015 and Augusta Unity in 2019. Since built it has been owned by Lolland Schiffahrts GmbH + Co of Lübeck, Germany and registered in Antigua and Barbuda.

The nickel is mined and shipped from Moa, Cuba by Moa JV a 50/50 operation of General Nickel SA of Cuba and Sherrit International of Canada. While I call the product Nickel Sulfides, it also contains cobalt (about 10%) so should probably be called "mixed nickel-cobalt sulfides".

The ship looked much the same when it arrived in Halifax August 28, 2021: 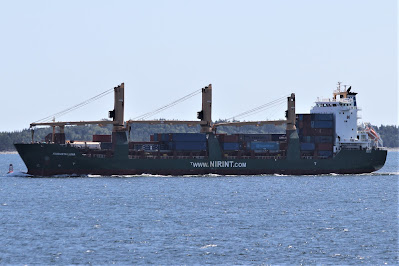 As noted in previous posts, the ship also carries tank containers, believed to be carrying molasses or rum.