We seldom see ships as lightly loaded as NYK Delphinus was today (April 21). Despite plenty of boxes on deck, the ship was showing a lot of boot topping. AIS reports it was drawing 8.7 m [28.54 ft] of water. 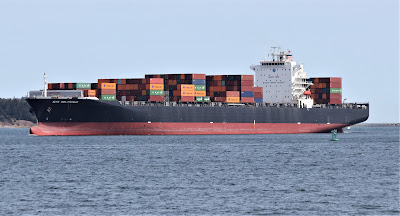 The ship is sailing on THE Alliance's AL5 service from the far east via the US west coast, Panama Canal, and Dominican Republic eastbound for Europe. Exports from the US (and Canada) are way out of balance with imports from Asia, so the ship is likely carrying lots of empties.

This is the ship's first call here since its scheduled July 6, 2021 call was cancelled. On May 14, 2021, while about 50 miles off Monterey, California on route from Vancouver, BC for Oakland, CA the ship reported a fire in the engine room. Fortunately the crew were able to seal off the area and no one was injured. Emergency reponse from shore assisted in cooling the hull and putting out the fire and the ship was towed into Oakland, May 17. By that time however the loss of power to refrigerated containers meant that cargo had spoiled, and there was other smoke and water damage to ship and cargo. It was three months before the ship could be unloaded, as the general average process for insurance meant that all cargo interests had to post bonds before their goods could be released. That process began August 11, 2021. The Dutch tug ALP Seeker then towed the ship to Busan, South Korea for repairs.

It resumed its normal rotation and sailed from Tokyo March 6 and made calls in Los Angeles, Oakland, Panama Canal and Catagena. Its last port was Caucedo, Dominican Republic April 17.

Two tugs met the ship and shepherded it through the harbour to Fairview Cove.

Later in the day MSC Tianjin sailed for Baltimore on the Indus 2 service from North India. It was more deeply laden, showing 13.8m [45.28 ft] draft. 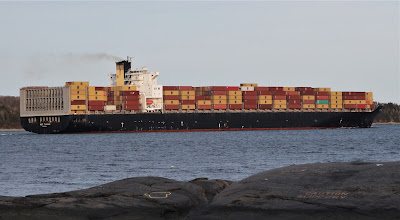 What appeared initially to be a black funnel, now seems to be the starboard side painted black instead of the usual MSC tan colour. The after side is that usual colour. I could not see the port side. 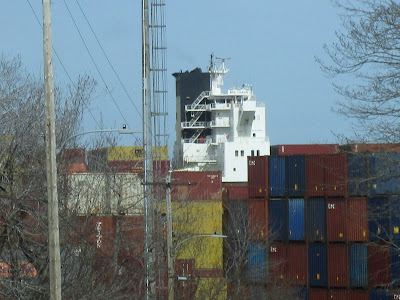 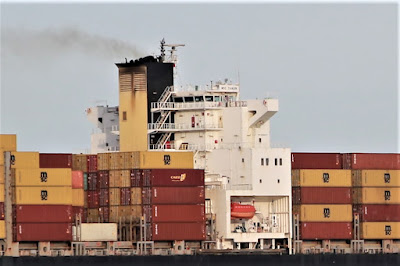 Perhaps they ran out of paint. Unlike owned ships, it does not carry the MSC banner on its hull either.