The work of the port continues unabated with daily arrivals of container ships and the somewhat less frequent arrival of RoRo traffic.

This morning, April 22 saw the arrival of both types of ships. At PSA Halifax it was a return visit of CMA CGM Brazil one of the so callled "Ultra" class of ships. It made its first visit in October 2020 when it set the record for largest container ship to call in Canada. (That record has since been broken by CMA CGM Marco Polo). 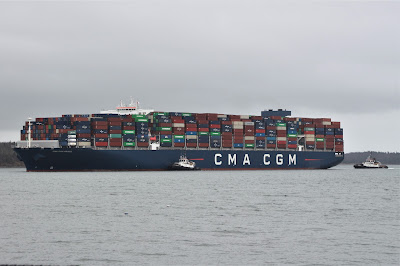 An early morning arrival at Pier 9C is the auto carrier Silver Ray. It will unload some machinery at Pier 9C then move to Autoport to offload cars. Despite the owner's name emblazoned on the sides, the ship is filling a slot on Wallenius Wilhelmsen's regular North Europe / North America service  SVC 1.

There is still machinery on the pier left from previous ships. It is gradually going out by truck and train.

The Silver Ray was built in 1999 by Kanasashi, Toyohashi as Altair Leader for MOL. However it was almot immediately sold to the US shipping company Waterman and renamed Green Dale. Under that name it called in Halifax in 2015. It was sold on to Sallaum Lines in 2017. The ship measures 50,087 gt, 16,157 dwt, and has a capacity of 4148 RT43 size cars. Sallaum ships normally operate from Europe and the United States to West Africa with new and used cars.

The Silver Ray flies the Panama flag, and is not to be confused with another autocarrier of the same name, but built in 2017, and flying the Marshal Islands flag. It measues 71,178 gt, 29,995 dwt that is operated by Hyundai Glovis.

An April shower had just passed over when the Silver Ray was moving from Pier 9C to Autoport, allowing for an opportunity to see the whole ship: 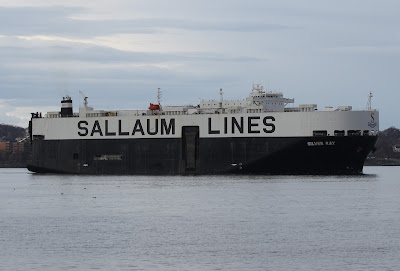