With Easter and Passover coinciding this weekend, shipping traffic was predictably quiet. Container ships however come and go as usual. Today (Saturday April 16) it was NYK Meteor at Fairview Cove and MSC Mirella Michaela at the Southend. The latter ship I did not see as it arrived at dawn and will sail over night.

NYK Meteor has been a regular caller off and on over the years. One of twelve ships of its class, all with "celestial" names, it still carries its NYK name and colours but is now sailing on ONE's schdule for THE Alliance. 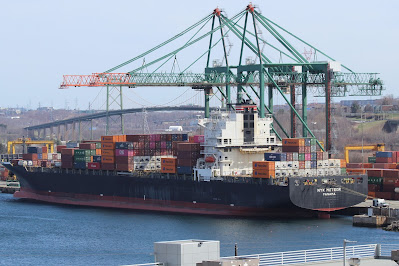 The ship is not actually owned by NYK Line as far as I can tell. It is likely working out a charter with NYK, and thus has been chartered to ONE and has not been "translated" to a ONE name and colour scheme. ONE is gradually building up a fleet of ow ned ships as charters from member companies expire. Since this ship is due for a major class inspection in 2022 or early 2023, I imagine its charter will be up then, so repainting would not be done for a short term deployment.