Dartmouth - where the action is

The eastern shore of Halifax harbour is still identified as Dartmouth even though it was amalgamated with Halifax, along with the town of Bedford and Halifax County to form the Halifax Regional Municipality (generally called Halifax) in 1996. Mail addressed to Dartmouth will still reach its destination however as there are numerous duplicate street names on the two sides of the harbour. The Dartmouth side has significant shipping activity, as today's four piloted arrivals were all destined for berths in Dartmouth.

The tug Atlantic Elm arrived from Saint John, NB towing the barge Atlantic Marlin and tied up at the IEL dock in the Woodside neighbourhood. (The City of Dartmouth annexed numerous suburbs in 1961, most of which are still identified with their traditional names.) The IEL dock is the site of the former Acadia Sugar Refinery, which was later used as a Volvo car assembly plant.

The barge will be used to transfer bow fabrications from Irving Shipbuilding Inc's Woodside Fabricators plant to the Halifax Shipyard, where they will be incorporated in construction of Arctic Offshore Patrol Vessels for the RCN. Interestingly the same tug and barge are usually to be found in the arctic during the summer months, transferring supplies to remote communities. 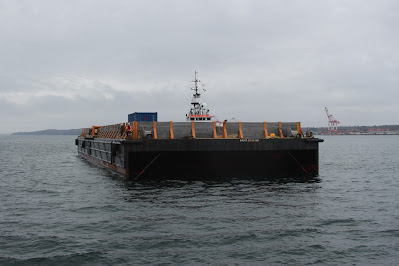 The Atlantic Marlin was built in 2000 by Jinling Shipyard in Nanjing, China as Boa Barge 18. Atlantic Towing Ltd acquired, and renamed, the 2318 gt barge in 2010 from BOA Offshore AS of Norway. It is a flat deck project cargo barge, but also has built up bulwarks to support or protect cargo.

The 3460 bhp tug Atlantic Elm dates from 1980 when it was built in Saint John as Irving Elm. It took its present name in 1995 as part of a company wide renaming program.

Also arriving in Woodside (or maybe South Woodside) later in the morning was the tanker Claxton Bay with a cargo of refined product for Irving Oil from Amsterdam.

The third arrival, was actually for Eastern Passage which was never part of the "old" Dartmouth, but is on the eastern side of the harbour, in what was once Halifax County. Autoport, owned and operated by the Canadian National Railway (CNR) is the port of entry for new cars to eastern Canada.

The car carrier NOCC Atlantic is a first time caller as far as I can tell. The ship was built in 2009 as Dyvi Atlantic by Samjin Shipbuilding Industries Co in Weihai, China. It was renamed in 2011 following the formation of Norwegian Car Carriers in 2010 when Eidsiva Rederi ASA and Dyvi Shipping AS merged.  (Dyvi owned the first true car carrier in 1964). 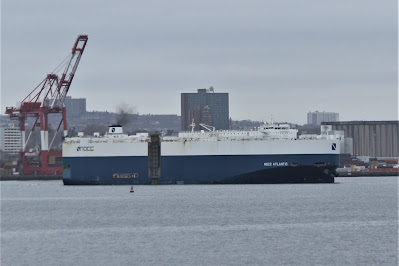 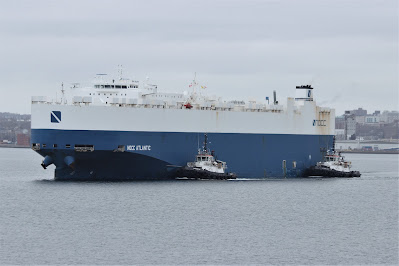 The fourth arrival for Dartmouth took place after dark, so I do not have a fresh photo. The Articulated Tug Barge (ATB) Leo A. McArthur / John J. Carrick brought in a load of asphalt from Hamilton, Ontario for owners McAsphalt Industries. The barge is equipped with boilers to maintain the asphalt in liquid form. Paving season is about to start and the asphalt plants are gearing up. I do hope they get into production soon as "pothole season" is in full swing.

McAsphalt has its own dock in Eastern Passage. Once known as Dook's Dock it is immediately adjacent to Autoport and connects to storage tanks on shore by means of a heated pipeline. McAsphat then delivers by truck to customers including its own parent company Miller Group (owned by Colas Canada). It can also receive asphalt by rail at the Eastern Passage depot. 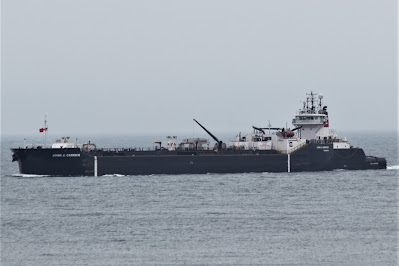 I am assuming the pair have not changed appearance since this photo was taken May 23, 2021.