Just as the archipelago of St-Pierre et Miquelon off the south coast of Newfoundland is a tiny outpost of France in North America, the naval vessel normally assigned to the islands is very small too. FS Fulmar P740 is a former trawler of modest dimensions: 38.9m long and 680 tonnes full load displacement. 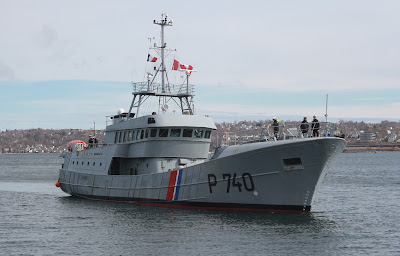 Nevertheless the vessel is a very capable one, fitted for search and rescue and law enforcement, with 30 days endurance and a range of 3500 nautical miles at 15 knots. Its hardy crew conists of an officer and 10 sailors.

Fulmar regularly exercises with the Royal Canadian Navy and the Canadian Coast Guard and has participated in Operation Nanook in the arctic, reaching 70 degrees North. It has also coordinated with the Danish navy in Greenland waters.

Built in 1991 as the civilian trawler Jonathan it was converted to a patrol vessel in 1997. Initially assigned to the French maritime police it was commissioned into the French navy in 2009. It is due for replacement in 2027. To save on a return trip to France it had its 2020 refit at the Industrie Océan shipyard in Ile-aux-Coudres, QC.

FS Fulmar makes courtesy visits to Canadian ports from time to time and has accompanied the Halifax to St-Pierre sailing race. It usually ties up at the Tall Ship Quay on the Halifax waterfront, as it did this morning. However it had to hold off for a time as Develop Nova Scotia's workboat crew rigged some fenders and moved a number of lobster traps that had been set nearby.

Fulmar loiters along the Dartmouth shore while some lobster traps are relocated. Their retrieval lines and buoys could become entangled in the ship's prop - not a nice welcome for a visitor.

Develop Nova Scotia is a crown corporation, incorporating the former Waterfront Development Corporation, and is responsibie for the public waterfront wharves and boardwalks in Halifax and Lunenburg. It has a much wider mandate for sustainable infrastructure development across the province. Its workboat is most often seen maintaing the floating boat docks in Halifax.

(    The workboat has "developns.ca" or "develop nova scotia"plastered all over it in at least eight locations, but it does not display its registration number, and its builders name is illegible. It reminds me of one of those radio ads where they repeat the phone number five times.)