Forward visibility on container ships can be a problem if the deck load of boxes is too high. The International Maritime Organization (the IMO) which sets standards for ship design, construction and operation, has a guideline for visibility, with several clauses. The most basic one is that the view of the sea surface ahead from the conning position is to be two ships lengths or 500 meters, which ever is less, and within 10 degrees both sides of the centre line.

It was found that early container ships could carry many more containers than the orginal design allowed, but that the visibility would be compromised. Because of the variable weights of loaded containers, and the number of empties in the cargo, ships could be loaded safely (within the regulations for freeboard), but did not have the forward visibility because of the high deckloads.

The solution was to build a second, supplementary, navigation bridge above the original bridge. The second bridge did not duplicate all the facilities of the original bridge, but did have a helm and thus the desired visibility from the conning position. How much it was actually used in practice, remains a question.

One early container ship with such a modification that I remember seeing was the ZIM New York, built in 1972 by Italcantieri, Genoa Sesti.

As Zim New York departs Halifax in 1978, it is staying well clear of the Bluednose II. The extra added bridge structure is just visible, and the ship is loaded to its marks.How many TEUs could the ship carry? - see footnote 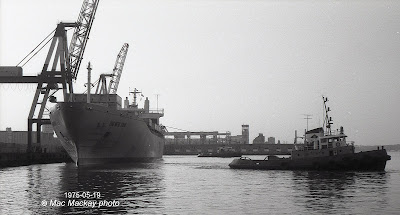 The high bridge is just visible as the ship prepares to leave Pier 41, Halterm in 1975. I think I was within the two ship's length but outside the 10 degrees margin. The tugs Point Viking (foreground) and Point Vim are pulling the ship clear with tow lines. (They were the ship's lines.)

In those good old days, the breakwater extended out beyond the end of pier 42 and had a lighthouse at the end. Here the ship has a much smaller deck load - and a noticeably lighter draft.The miniature second bridge is just visible.

Even with more historical information available on cargo, and sophisticated computer calculated mathematical models for determining ships' deadweight capacities these days, the actual weight of cargo at any one time can vary greatly. So some "modern" ships have also been fitted with one of these supplementary bridge structures. Such a ship appeared in Halifax today. 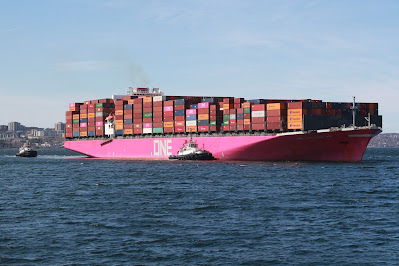 Leaving Fairview Cove this afternoon, the ship would have had virtually no visibility from is original bridge, and so the small upper bridge was certainly required to meet the visibility standard. Was it added after the ship was built?

The ship is owned by K-Line and operates for Ocean Network Express, the Singapore based combination of the three major Japanese container lines (NYK, MOL, K-Line). It was renamed in 2021 and painted in ONE's magenta theme. ONE is a partner in THE Alliance and the ship is on the Asia-North America EC5 route.

Update: Thanks to a reader with better reference material than mine, I can say that the 1436 TEU capacity was the original capacity for the ship when built.

I did not call the added structure a "wheelhouse". That might have been correct terminolgy - but not all ships have wheels anymore. I also did not call it a "monkey's island", a term used for open helm positions, left over from the days of sail.The hardy tars that manned those positions on early steamships deserve great credit for being exposed to all weathers, where they could supposedly see and hear other ships. Fortunately modern seafarers do not have to put up with those conditions, and can still control a ship from the shelter of a proper navigating bridge.