The cruise ship season began on Tuesday April 20 after a two year interruption. The first ships provided a contrast in size betweeen the Norwegian Getaway and the Ocean Navigator. (See previous post).

Today, April 28, there was a repeat of sorts with the noon time arrival of the Ocean Voyager, a sister ship of the Ocean Navigator. 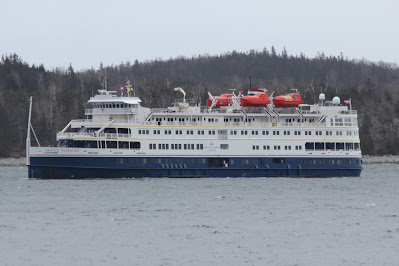 The two ships have had parallel careers, staying together through several ownrrship and name changes. Today's ship was built in 2001 by Atlantic Marine in Jacksonville, FL as Cape May Light, becoming Sea Voyager in 2010, Saint-Laurent in 2015 and Victory II in 2016. It has also been acquired by Hornblower Group and is sailing for American Queen Voyages this year under the new name Ocean Voyager. Oddly, published statistics vary somewhat between the two ships, with Ocean Voyager showing a capacity of 216 in 105 cabins and 90 crew, whereas the Ocean Navigator has 220 passengers in 110 cabins and 77 crew. Certainly the smaller crew number seems more reasonable.

Ocean Voyager will remain in Halifax overnight and is due to sail at 1745 tomorrow, allowing a day and a half ashore for passengers. By that time they will have had more than enough of the forecasted frigid, drizzly weather. 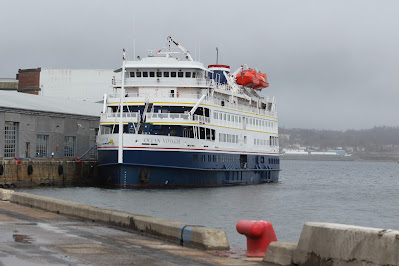