While waiting for arrivals at PSA Halifax's Atlantic Hub (the terminal formerly known as Halterm) I was able to wander out to the end of the breakwater, which has finally opened after its winter closure. This gave an excellent view of the departing Thalatta from Autoport. On its way out from Eastern Passage it passed Imperial Oil's number 3 dock where the Lian Xi Hu was still offloading product from Antwerp. Yesterday's backlit photo did not do justice to the latter ship's blue hull colour.

Speaking of colour I was not impressed by the browm smoke from the supposedly scrubber equipped autocarrier. Scrubbbers can apparently be bypassed at will.

There was time for one more "for the road" photo of the Thalatta despite plenty from the last two days. 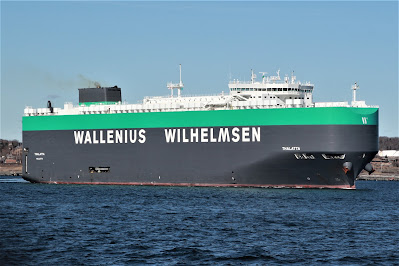 The ship left a tremendous amount of cargo at Pier 9C before moving over to Autoport last night. [see also previous posts]

The two late afternoon arrivals were a sort of bonus since ships usually arrive pre-dawn. First up was Oceanex Avalon arriving from St.John's, NL. 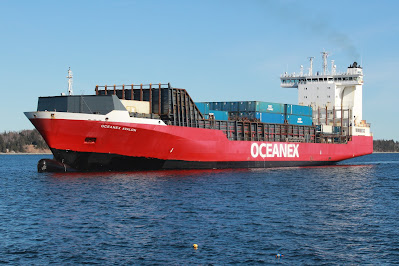 The ship is substituting on Oceanex's Halifax - St.John's service, alternating weekly with Oceanex Connaigra. On alternate weeks each ship runs to and from Montreal. This routine is expected to continue at least until June 17, the predicted return date for Oceanex Sanderling which is undergoing an extended refit in Amsterdam.

Oceanex Avalon has a hatch cover over number one hold, but the remainder of the cargo hold space is open to the elements. This speeds up loading and unloading, since heavy hatch covers do not have to be lifted on and off. The last "bay" of containers, immediatley forward of the bridge, is carried on the deck over the engine room, and terminates with a large lashing frame.

The ship I was waiting for arrived next for Pier 42. MSC Sao Paulo arrived on MSC's CANEX1 service from the Mediterranean. 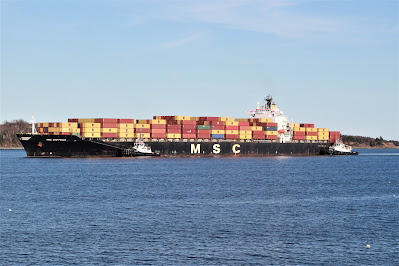 Built "way back" in 1998 by Hyundai, Ulsan, it is a 53,324 gt, 63,537 dwt ship with a container capacity of 4688 TEU. It started life as Pohang Senator and in 2008 became CSAV Pyrenees and in 2013 became Pohang for a short spell before taking its present name. (As usual these former names give a road map of developments in world shipping- see footnote)

Once the ship offloads some boxes here and reduces its draft to suit St.Lawrence River regulations, it will sail for Montreal.

The names ships carry can often tell a story, not just about the ship and where it traded, but about the companies it worked for, and events in the shipping businesss.

> Many ships were built for German investment syndicates and chartered out to shipping lines. These arrangements were beneficial to both parties and in the case of this ship, the charter was with Senator Line. Initially a German line, Senator went through a number of owners, finally in the hands of the Korean Hanjin Shipping Co Ltd, with the venerable German company Laiesz, having a minority holding. In 2009, with Hanjin ranked as seventh largest container line, Hanjin-Senator was closed down. In 2016 Hanjin itself was insolvent and was delcared bankrupt in 2017 - the largest ever failure of a container line. Hanjin-Senator's Mediterranean-Montreal traffic was largely picked up by MSC.

> CSAV, Compagnia Sud-Americana de Vapores is a large Chilean owned shipping conglomerate. In 2014 it merged its container shipping business into Hapag-Lloyd, while keeping its other shipping interests independent. Rationalisation of service meant that several chartered ships, including this one, were released. An early end of the charter meant the ship was on the spot maket for a time before a longer term arrangement could be found, this time with MSC. It is now close to the 10th year of that charter, and with an aging ship, it will be interesting to see what is next. Demand is so high for container ships right now, that even 24 year old ships are making top dollar.

> As a rule MSC ships with women's names are owned directly by MSC or indirectly through one of its subsidiaries. Ships with geographical names are on charter from arm's length independent owners.