The Port of Halifax cruise season traditionally hits its stride in September / October, but this year it is getting off to an early and busy start. Resuming activities after two years on April 26, the port greeted two ships, then one ship on April 29 and two more ships today April 30.

First in this morning was another large one - the 92,250 gt Norwegian Dawn with a capacity of 2,340 passengers, with a crew of 1,032. It arrived before full daylight and monopolized Pier 22 when it tied up. In fact its bow overhung the end of the seawall, projecting several feet into the Pier 23 camber.

The ship was built in 2002 by Jos. L. Meyer, Papenburg, Germany and has had several noteworthy incidents in its career. For a summary see:  Wikipedia

Later in the morning it was a smaller ship, the Seven Seas Navigator rated for 490 passengers and 340 crew. 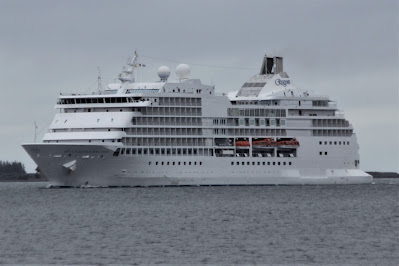 Because of the larger ship's position at Pier 22, and the other available berth at Pier 24, the Seven Seas Navigator called for tugs, a very rare occurrence for cruise ships calling in Halifax. 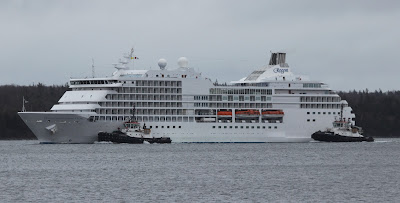 Cruise ship operators hate to have their pristine white paint scuffed up by black tug fenders. Sometimes tug operators drape white canvas sheeting over their bows, but not this time.

I have related the ship's history before, which I repeat here:

The Seven Seas Navigator ship started life in 1988 in the Soviet Admiralty Shipyard in St.Petersburg as a naval support ship for satellite tracking, launched in 1991 as Akademik Nikolay Pilyugin. However it was bought incomplete by Radisson Cruises. They has it towed around to T.Marrioti SpA in Genoa and had  it completed and outfitted in 1999. It initially had 250 cabins and could carry 542 passengers but this was reduced to 490, but with a crew of 340 giving a very high degree of service for those travellers.
The 28,550 grt ship is strengthened for navigation in ice, but has had vibration issues. Its stern, including props and rudders, was re-built by Blohm+Voss in Hamburg in 2010, including the addition of sponsons, or bustles, but that does not seem to have had much effect, and the ship is noted as "lively" at sea.
Radisson Seven Seas Cruises re-branded itself Regent Seven Seas Cruises in 2006 and in 2016 reportedly spent $40mn on a two month long refurbishment to bring the ship in line with Regent's décor standards.

The Sevesn Seas Navigator made headlines when it inaugurated the cruise season in Saint John, NB April 28, 2022, and it was reported that one crew member (who did not have contact with passengers) was isolating on board with COVID-19. The reports stated that there were only 124 passengers but 374 crew.

After Halifax the ship will go on to Sydney, Charlottetown and Corner Brook as part of a 15 night cruise that started in Miami. Its last port was Boston. 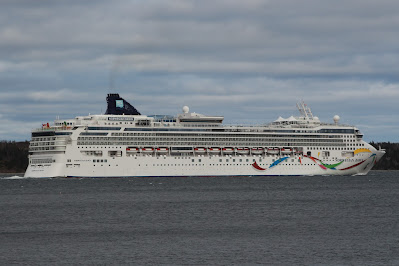 Norwegian Dawn was the first NCL ship to carry so called "hull art".

(This beholder's eye does not see art, but superfluous applied decoration.)