The new bulk salt carrier Nukumi delivered to Canada March 27 arrived under the temporary flag of the Bahamas, registered in Nassau. 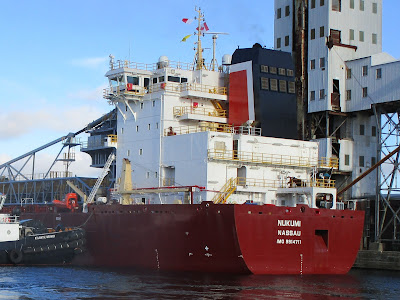 The Bahamas flag is barely visible in this photo, but the port of Nassau is clear as is the Canadian flag flying in the courtesy position along with the pilot flag and the yellow "free pratique" flag.

It did not take long for CSL to enroll the ship under the Canadian flag, and it was registered in Montreal the next day, March 28.

With the "Canadianization" process under way, the permanent crew did not have a lot of time for repainting the port of registry on the stern, not to mention the rainy and even snowy weather of the past few days. Conditions improved yesterday, and "Nassau" was painted out, revealing the large welded letters for "Montreal" which had been applied at the shipyard. (The Canadian flag had been flying since the 28th.) 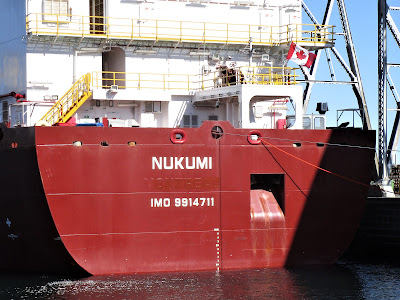 Today the white paint appeared, and the ship looks complete. 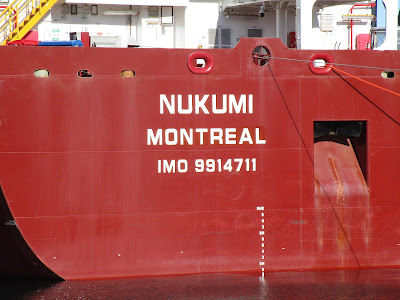 The ship is also flying the CSL houseflag, although it is difficult to see. 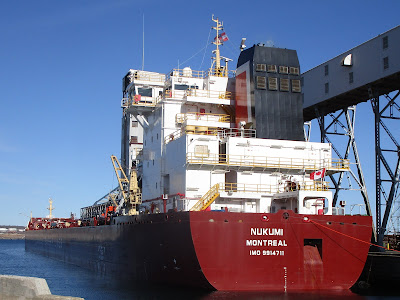 Of note is the stern anchor. At one time all ships travelling in the St.Lawerence Seaway system were required to have a stern anchor. It is no longer required of foreign ships, but Canadian ships have one. They also have what are commonly called "Port Colborne fairleads" in specific locations. These are rotating rollers in the fairlead, such as the one amidships in the stern rail. They allow wire lines to be adjusted in the Seaway locks with minimal chafe.

No sailing date has been posted yet for the ship, but it will be entering service soon.