The self-unloading bulker CSL Kajika anchored in Halifax April 19 - marking its first visit to this port. Since joining the CSL Americas division of CSL Group Inc in October 2021, the ship has been working in the CSL International Pool on the east coast of North America and as far south as Columbia and Panama, chiefly carrying coal and aggregates. 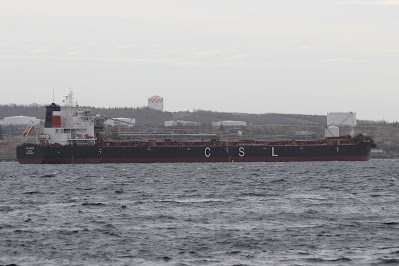 The ship is the second of two Kamsarmax gearless bulkers acquired by CSL and converted to self-unloaders. Sister ship CSL Koasek has been working the west coast. The two ships are additions to the fleet rather than replacements of older existing ships.

Built in 2015 by Jiangsu New Yangzi Shipbuilding as SBI Flamenco for the Lauro family's Scorpio Bulkers Inc, it initially was registered at 44,290 gt, 81,800 dwt. It was renamed Flamenco in 2019 when it was acquired by CSL and handed over to COSCO Nantong for the conversion work. That work included two longitudinal gravity fed conveyors leading to a single loop belt system and an 80 meter slewing boom. Unloading rates range from 4,200 mt/hr for coal to 5,000 mt/hr for other commodities. With the seven new double hopper shaped holds, revised tonnages come in at 44,408 gt, 77,247 dwt. The ship is completely double hulled including bunker tanks.

CSL Americas, once called CSL International, is one of many divisions within the CSL Group Inc, which now has interests in Asia, Australia and Europe. Among them is the founding company Canada Steamship Lines.

CSL Kajima sailed later in the day for Sydney, NS with its cargo of thermal coal. No reason was given for its stop here. I did see the launch Halmar alongside at one point.