The large get larger, the small get smaller

So much cargo travels by container ship these days that ships are built of all different sizes to cater to the needs of specific trade routes. As some of those routes acquire larger and larger ships, what were once the "largest" ships are eclipsed. What would have been considered a large ship, in terms of capacity, years ago has now been relegated to mid-size or even small size. 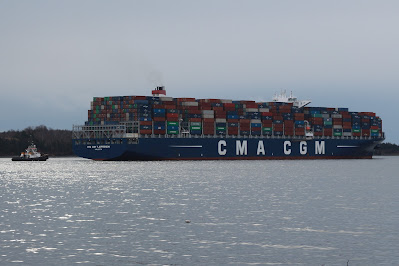 At the other end of the scale is today's arrival for the Icelandic shipping company Eimskip. The Selfoss has a capacity of 698 TEU. 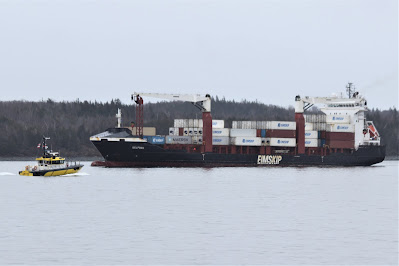 That is an appropriate size for the ship that trades between Reykjavik, Halifax, Portland, ME and Argentia NL and back again. Many of its containers are refrigerated, so it is likely to have a large number of reefer plugs. It also has two cargo cranes, to handle boxes in smaller ports.

The 7464 gt, 8166 dwt ship was built in 2008 by the Fujian Mawei Shipbuilding Co in Fuzhou, China. Originally named Sophia by German owners, it was renamed Selfoss when acquired by Eimskip in 2017.