It was March 27, 1987 when ice began to "invade" Halifax harbour. After blocking the entrance to the port for several day, chunks of ice started to work their way inside. 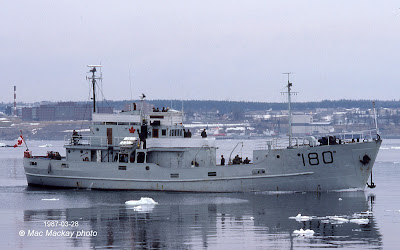 At first a few interant chunks did not cause much concern, and ships were able to go about their business as usual. However the ice continued to build and  by April 1 was packed in solid.

Priding itself as "ice-free", Halifax had some 'splainin' to do, and it was this: The ice did not originate in Halifax, but came from the Gulf of St.Lawrence and had blown and drifted out into the ocean. Currents and onshore wind then moved it down along the coast and into Halifax. The ice was heavily broken up but well compacted, and continued to build in.

Although it does not need breaking, drift-ice is difficult to navigate through because of pressure. Wind "grabs" the rough surface and moves the ice, and packs it when it hits an obstacle such as the shore or a ship. Tidal forces only exacerbate the effect. If ships are at light draft, the ice can damage propellors.

The sight of drift ice in Halifax is very rare - this was the first time since 1960 - as was the sight of the CCGS William (ex Sir William Alexander (i))  going out to lift harbour buoys so that they would not be carried away. 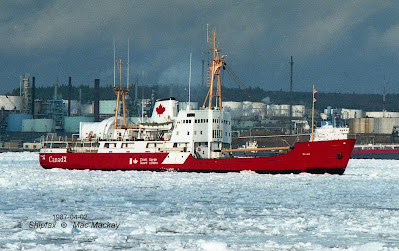 (The new Sir William Alexander was removed from service due to a defective derrick system, and its predecessor of the same name was re-commissioned from layup. It was built by Halifax Shipyards in 1959 and was one of the finest ships in the fleet. It was renamed William when it was laid up pending sale. It was less tan 30 years old and still in good condition.)

CCGS Louis S. St-Laurent was also called in to work in its home port for the first time, to clear tracks for ships.

Several regular callers were able to make their way surprisingly well, even though they rarely if ever had to navigate in ice. 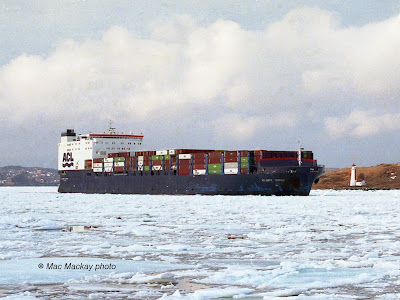 Atlantic Cartier even made its way west of George's Island outbound past the iconic lighthouse.

Ships tied up in port were jammed in  by ice in the cambers between piers. In places the ice rafted up to 2 meters deep. 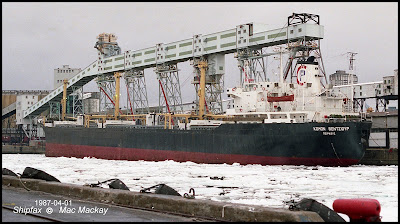 Common Venture was at Pier 28 for a cargo of grain.

Ships tied up at sea walls were at risk of being forced off the dock by ice working in between ship and pier. The force of the wind and tide-driven ice was strong enough to part lines. Tugs were called to flush the ice away, and ships were constantly adjusting their lines. 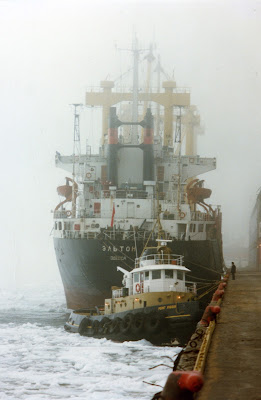 The tug Point Vigour stood by astern of the USSR ship Elton at Pier 21 for more than 24 hours, flushing ice away from the seawall and the ship's propellor. A crew man stood by on shore, with his signature fur hat on, to tend to the ship's lines and gangway if needed. The Elton was in port to load flour for Cuba and was very lightly ballasted, with some prop blades exposed.

A number of fishing vessels were caught in port too - some were small wooden inshore boats, but others were large foreign vessels. Their captains did not want to sail through 10 kilometers or more of ice to reach clear water offshore. 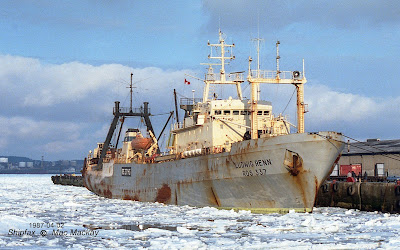 The East German factory trawler Ludwig Renn, out of Rostock, tied up at Pier 30-31 for the duration.

The pilot boat was too fragile to operate in ice and so the tugs Point Valiant and Point Carroll were deputised. Sometimes they could not work themselves in alongside ships, so pilots actually walked across the ice to embark. The ice was at its heaviest April 1 and 2.

By April 3 most of the ice had moved back out to sea thanks to a wind shift, but remnants remained for some time. Shipping returned to normal.

Wallenius Line's weird autocarrier Aida, converted in 1980 from a bulk carrier, made its way through some small patches of ice to reach Autoport April 4. The ship was scrapped in December of 1987.

Harbour ferry service, which was cancelled, did not resume until April 6. At least one daring soul had in the meantime walked (or clampered) across the harbour on the ice.