Cruise ships returned to the Port of Halifax today, April 26, after a lengthy hiatus. When the last cruise ship called here, the Riviera on November 6, 2019 , no one had any idea that two entire cruise seasons would be cancelled completely. 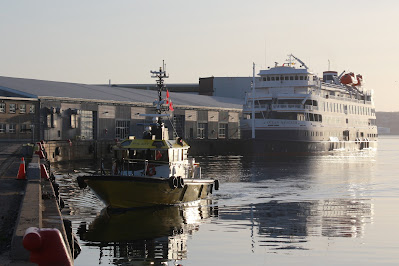 Now with strict health measures in place, cruise ships returned with two ships tying up at adjacent berths early this morning. First place honours went to the "pocket" cruiser Ocean Navigator when it docked at Pier 23. The newly renamed ship was built by Atlantic Marine in Jacksonville, FL in 2004 as Cape Cod Light. It became Coastal Queen 2 in 2007, Clipper Discovery 2 in 2009, Sea Discovery in 2009 and Victory II in 2008. With sister ship Victory I the former Cape May Light it made previous calls to Halifax. The 4954 gt ship can carry 220 passengers in 110 cabins, with a crew of 77. Owners the Hornblower Group renamed the ship this year to operate under the American Queen Voyages banner.

At the opposite end of the scale was the second arival this morning. Norwegian Getaway is a 145,655 gt ship built in 2014 by Meyerwerft, Papenberg. Its 3,969 passsengers and 1640 crew capacity made it the world's ninth largest cruise ship when it was built. (It now shares 34th and 35th place with sistership Norwegian Breakaway). 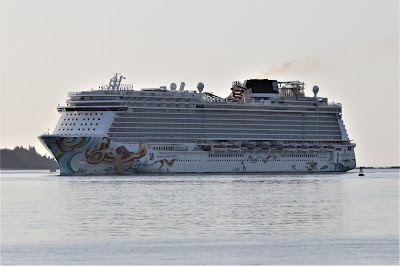 The amazing growth of the cruise industry since 2014 has been stalled by the pandemic with scores of older ships heading to the scrappers as previously ordered new ships are delivered. Some lines have gone out of business, but those that have survived - possibly at a reduced scale - a hopeful for a rebound this year.