After several loads of product from Canadian sources in recent weeks, Imperial Oil again received a cargo from Antwerp arriving April 6. The Belgian port has been the source for most of Imperial's seaborne cargo for the past few years, and the switch to Canadian refined product was thought to be a result of disruptions to European supply from Russia. 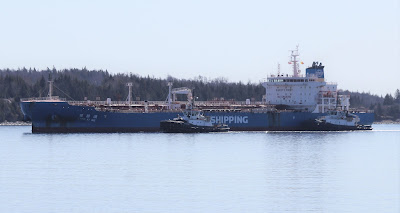 An odd aspect of the latest delivery was the ship carrying the fuel. Lian Xi Hu is a Hong Kong flagged ship owned by Cosco Shipping Energy Transportation. (COSCO is the China Ocean Shipping Company Ltd, the 1114 ship strong company has 120 tankers as well as container and other ships.)

As far as I can recall this is the first time a COSCO tanker has appeared in Halifax. The 29,848 gt, 49,999 dwt MR tanker was built by Guangzhou International in 2017. Unusual for a tanker, its foredeck is covered - a feature more commonly seen on cargo ships, to shelter winches (and crew) from weather or sea conditions, and to protect the main deck. It also has a significant bow flare, suggesting the ship was built to withstand very tough conditions. 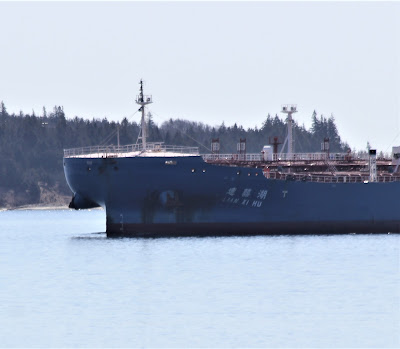