As PSA Halifax expands the back up area for the Southend container terminal (alias Halterm) A.K.A.  Atlantic Hub, work has begun to clear Pier A-1. That work will include demolition of the transit shed, and filling in the camber between Piers A-1 and B (eliminating berths 33 to 37. It has also meant the relocation of cargo operations at  Piers 30 - 31 to Pier 9C, in the Richmond * Terminals area between the bridges. 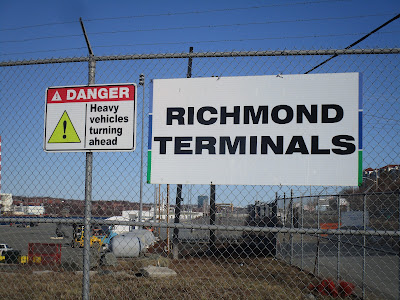 The Pier 30-31 open area on Pier A-1, including the transit shed ,were leased to the stevedoring company Logistec, but that lease was not renewed and for the past week or so trucks have been shuttling Logistec's gear, including yard trucks, container trailers, Mafei trailers, lifting spreaders, etc., to the new location. Logistec handles the nickel sulfides cargo from Cuba on Nirint ships, which is stored indoors, then forwarded by rail to Alberta for processing. They also offload "high and heavy" and other non-automobile RoRo cargoes that do not go through Autoport.

Today saw the arrival of the first ship to Pier 9C for Logistec. It was the Wallenius Wilhelmsen autocarrier Thalatta. 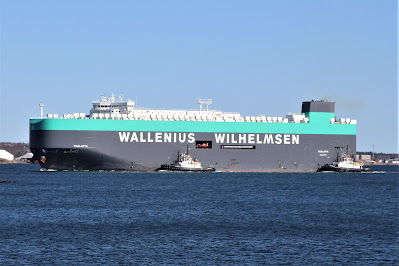 Tugs met the ship at the Middle Ground as usual, but rather than turning into Eastern Passage for Autoport, they headed through the lower harbour and the Narrows, all the way to Bedford Basin. 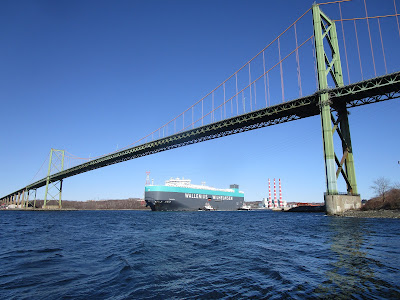 Once clear of the A. Murray MacKay bridge the ship went well north up into the Basin and turned, 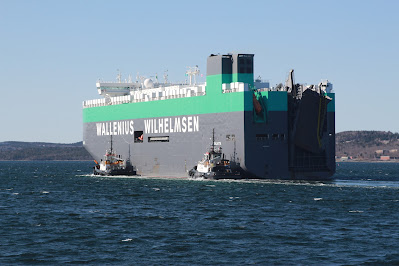 and redirected southward toward the Narrows again. 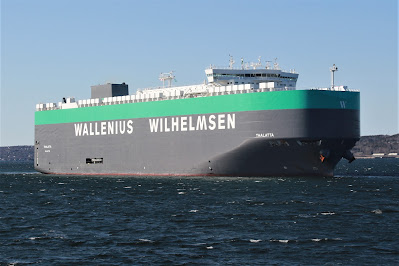 then alongside Pier 9C, in the shadow of the MacKay bridge, 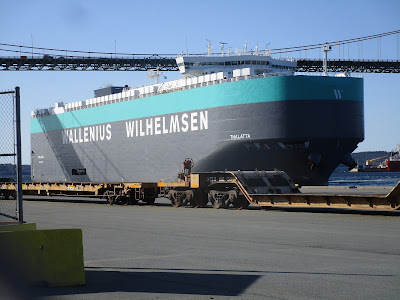 where heavy load rail cars, and buffer cars, were waiting for some large cargo.

The ship's stern ramp is angled to starboard so the ship must tie up starboard side to the pier in order to unload. When it has completed work at Pier 9C it will move to Autoport to unload standard automobiles and light trucks. (Autoport is owned by CN Rail and receives imported autos, preps them, stores them and sends them out on demand by rail. It also has export facilities.)

Built in 2015 by Hyundai Samho, the 75,283 gt, 23,786 dwt Thalatta has a capacity of 8,000 cars and can handle the high and heavy cargo using its 320 tonne capacity ramp. Unlike earlier autocarriers, this one does not have a side ramp. However it does have gangway recesses on both sides (the port side also has the pilot door)  and a lifeboat recess on the port side. A small pilot door is located near the waterline on the starboard side.

There is also a second starboard side gangway near the stern that stows vertically in its own recess. (Pedestrian traffic on the stern ramp when vehicles are moving is very dangerous, so the gangway may be a safety feature - but apparently not here.) 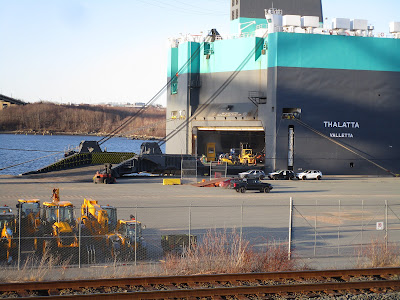 Among the cargo offloading at Pier 9C are these JCB backhoes, that are too large for standard autorack rail cars. They will likely be dispatched out of Halifax by truck or by rail flat car. It will be interesting to see the large object destined for the big well car - likely an electrical transformer.

Sometimes cargo is moved off the ship onto the pier to make way for the oversize cargo, then reloaded. That may be the case for the JCBs which I have never seen being unloaded here before.

It is worth noting that the Port has kept the Richmond designation for the area of Pier 9 to Pier 9C. It was the Richmond neighbourhood that was almost completely destroyed in the 1917 Halifax Explosion and most of the 1,782 (confirmed) dead were residents of the area as were many of the 9,000 injured. The epicentre of the explosion was at Pier 6, which is between the current Richmond Terminal and Halifax Shipyard.