A Doubly Glorious Day in Halifax for Ship Watching

I have made note of Glorious Leader before, since it has called in Halifax many times, and its name likely reminds everyone of North Korea's despotic leader who likes to be thought of as glorious, just as his father did.

Glorious Leader on a previous visit.

Glorious Ace is a new one for me, built in 2010 by Minami Nippon, in Shitanoe, the 58,939 gt, 18,836 dwt ship has a capacity of 5291 CEU. It is fitted with a 100 tonne stern ramp, which allows for carrying some heavier cargo than just cars. However it is a relatively small ramp compared to some newer ships where the capacity exceeds 300 tonnes. 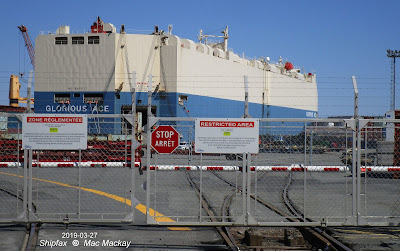 After unloading at Autoport, last night the ship moved over to pier 31 this morning where its giant sized name was just visible above layers of security fencing. 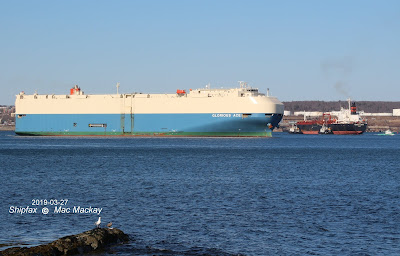 On departure the Glorious Ace held off until a tanker was past Ives Knoll inbound for Imperial Oil.

All but the smallest ships are using the western channel in and outbound these days as Dominion Diving is working off York Redoubt, I believe on underwater cables for the navy's static sound range. Since the western channel, also known as the deep water channel is relatively narrow ships are taking turns in and out to avoid meets.

Ridgebury John B makes its way inbound in the western channel, keeping well clear of Dominion Warrior (right background) working in the main channel.
The Marshall Islands flagged Ridgebury John B is a 28,063 gt, 45,975 dwt Mid Range product tanker, built in 2007 by Shin Kurushima, Onishi as Challenge Pioneer. It was acquired and renamed by current owners Ridgebury Tankers in 2014, an American company, and is assigned to the Danish based Norient Tanker Pool. It was here once before in November 2014, shortly after joining Ridgebury.

The ship is inbound from Ijmuiden (Amsterdam) for Imperial Oil, and has been waiting outside for a couple of days for Algonorth to off load. Normally ships from Amsterdam are for Irving Oil, so this is a bit unusual.
Algonorth has now gone to Bedford Basin to anchor. It has been doing the Lévis / Halifax shuttle (with its last trip from Montreal instead) for most of the winter, but may now be waiting out for a spell for a new assignment since the St.Lawrence Seaway is more or less open for business.

There was other traffic in the harbour today, but mostly regulars, including MOL Partner which made a good impression squeezing through the Narrows en route to Cerescorp in Fairview Cove. 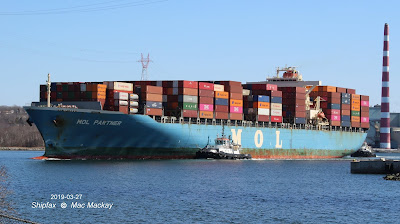 The 6350 TEU ship is on its eastbound leg for the EC5 Alliance service. It was westbound March 9 and it appeared in that day's Shipfax.

I mention it again only because the three big Japanese shipping companies, K-Line, MOL and NYK are fierce competitors in most lines of shipping (see auto carriers above, for example) but agreed to merge their container lines to survive intense competition from the giants Maersk, COSCO, MSC and CMA CGM. However the merger has been much more difficult than originally hoped. The Ocean Network Express, ONE, (see magenta containers in photo above),  is losing money hand over fist as it tries to gain that magic "synergy" so beloved of merger fans. So far not so good. Vastly different corporate cultures and computer systems are at the root of the problem.

New ships are being delivered with magenta hull paint and ONE names, but the ships of the component fleets, at least so far, are retaining their "heritage" names and liveries.