Spring Break in the Basin

With the first day of spring just over the horizon, it looked like spring in Bedford Basin this morning as ships came and went from Cerescorp.

YM Enlightenment arrived from New York, eastbound on the AL1 service, operated by THE Alliance and ACL. 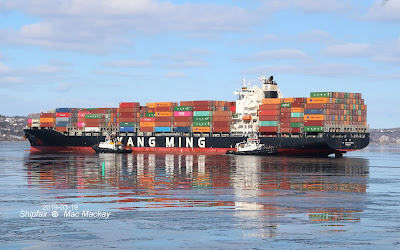 Some very thin shore ice has broken away and is working its way out to the harbour.

YM Enlightenment had to hold off for nearly an hour as the incumbent at Cerescorp finished loading.
Brighton is on the eastbound leg for THE Alliance's EC5 service - next port Jebel Ali. 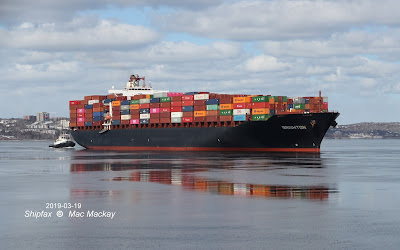 The 71,786 gt, 72,982 dwt ship, with a capacity of 6350 TEU, built in 2007 by Koyo Dockyard Co, Mihari, joined the 11 ship rotation in January. It has been chartered from Zodiac Maritime Ltd, having previously served other lines as APL London from 2007 to 2013 and Zim London from 2013 to 2015. While not a direct replacement for the fire damaged Yantian Express it the rotation, it does fill out the roster so that a weekly service is maintained. It is also assuned that it has been chartered by HAPAG-Lloyd.