Two ships with Quebec connections made pit stops in Halifax today. Their Canadian careers are oddly parallel, though they are not connected in any way. Both came to the Canadian flag one day apart and both were registered in ports close to base of operations, rather than one of the larger ports. 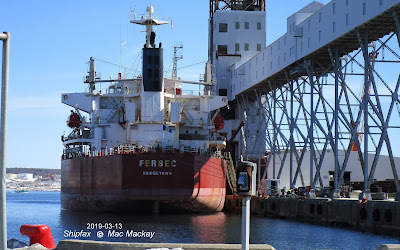 First in was the geared bulker Ferbec owned by CSL. The ship is returning from the winter working under the Barbados flag (port of registry Bridgetown), and is in port to be reflagged Canadian. The ship was brought to Canada in 2017 to work a contract for Rio Tinto Fer et Titaine (RTFT).  Prior to that CSL had run the ship in Australia since 2010 as CSL Melbourne. It was built in 2002 by Nantong COSCO in China as Orientor, and also renamed Orientor 2 the same year. It and is a handymax bulker of 27,198 gt, 49,052 dwt, equipped with four cranes and clams. It is the only ship in CSL's domestic fleet that is too large for the St.Lawrence Seaway. 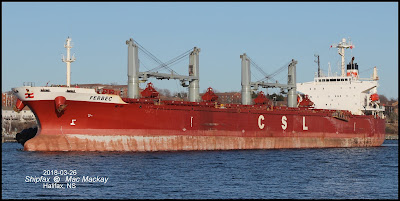 CSL first registered the ship in Sorel, QC May 18, 2017, but it has been flagged out for the last two winters. During the navigation season it operates a constant shuttle between Havre St-Pierre and Sorel-Tracy. It carries ilmentite ore from the Tio open pit mine 43km inland from Havre St-Pierre. The mine produces blast rock which is crushed to 7.5cm and transferred by the Chemin de fer de la Rivière Romaine railroad to Havre St-Pierre. Once loaded on the ship it is transported to RTFT's reduction plant in Sorel-Tracy. There the ilmenite is reduced to its major components, iron and titanium dioxide. The latter is the main source for white pigment in paints and many other products. 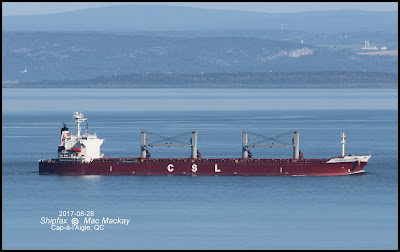 Upbound on the St.Lawrence river with a full load of ilmenite.

Ferbec transports enough ore each season to meet most of RTFT's needs. However they also have mines in Madagascar and Africa which are less expensive to operate, despite harsh criticism on environmental issues. The Tio mine also stockpiles its production and does not work year round. Last year it operated for 30 weeks, starting in mid-March with a  four week holiday break in July and shutting down in early November. For the previous two years it only operated for 24 weeks. This year it is expected to operate for 32 weeks. (There is year round activity at the mine site, but that is related to maintenance.)


Ferbec 's last port was Belfast, and it is expected to resume service by the end of the month.
As a footnote, Rio Tinto renamed the operation when it took over. It was previously known as Quebec Iron and Titanium (QIT) and some of its operations still use those initials. Also the mine is near a lake called Lac Allard, but since there is another Lac Allard in the Laurentian region north of Montreal, the RTFT mine area is now referred to as Tio or Lac Tio.

A bulk carrier of a very different sort arrived at noon time. NACC Quebec is specialized cement powder carrier. Built as the general cargo ship Tenace in 2011 by Tuzla Gemi Endustrisi, in Turley, it was converted in 2016 to transport bulk cement and to unload via a special pneumatic system. It can also carry different grades of cement. As part of the conversion, carried out in China, it was fitted with an Alfa Laval Pure SOx (sulphur dioxide) exhaust gas scrubber. Its tonnages are now 10,243 gt, 15,286 dwt.

The ship is owned by NACC Shipping Canada Ltd, a joint venture of Algoma Central Marine and Nova Marine Holdings of Switzerland.The ship operates from the Ciment McInnis facility in Port Daniel-Gascons, QC, and delivers the cement seasonally to the Great Lakes region. In winter it delivers to Providence, RI and Bronx, NY. It was first registered in Gaspé on May 19, 201, and has remained under Canadian flag year round. 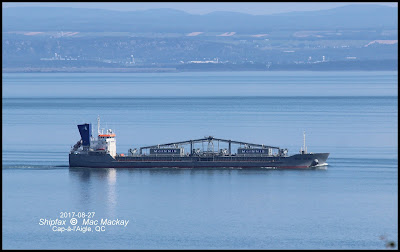 An unmistakable sight on the St.Lawrence with its odd funnel, containing an exhaust gas scrubber, and its unusual unloading system.

McInnis (founded by the Beaudoin family, descendants of the Bombardier founder) quarries the limestone, produces Portland cement, and loads ships all at the same site on the south shore of the Gaspé peninsula on the Baie de Chaleur. Despite environmental concerns over its huge carbon emission footprint, the $1.5 billion operation has created jobs and pays a hefty tax bill in an area of low employment. Cost overruns estimated at more than $600 mn forced the main investors, Quebec government agencies, to take over control of the operation. They tried to sell the operation to recoup their losses, but bids were too low and so far its production has not risen to break even levels. 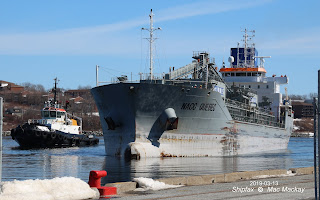 Atlantic Willow stands by to assist the ship into pier 9B. The scrapes on the ship's hull are signs of many passages through the St.Lawrence Seaway. 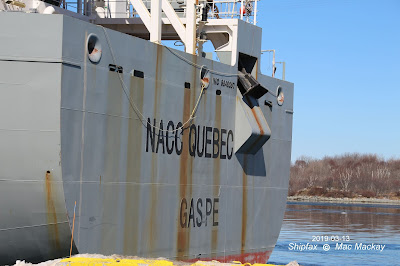 The ship has remained Canadian all winter, although someone should touch up the acute accent on its port of registry.