With both of Nova Scotia's offshore gas installations shut down, there is till activity, but at a much reduced level. Both Sable Offshore Energy (Exxon / Mobil) and Deep Panuke (Encana) are in the process of decommissioning and eventual abandonment and removal over the next two years.

Encana's short lived project, that only began production in 2013 was expected to have a 13 year production life. On the strength of that they entered into a ten year renewable contract with Atlantic Towing Ltd to provide the Offshore Supply Vessel Atlantic Condor. The four well field encountered significant quantities of water and with the drop in gas prices the project became unfeasible, and after several seasonal stops and starts, production halted permanently in May 2018.


The Atlantic Condor was built at Halifax Shipyard to the UT 755 LN design and launched October 31, 2010 (a day later than planned due to high winds.) It went into service in 2011 and has worked steadily in and out of Halifax on the 250 km run to the Deep Panuke site. 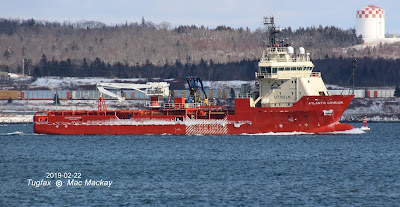 On February 22 it made one of its rare departures from Halifax for another destination, and that was St.John's, NL where it has been drydocked.

Today's offshore vessel arrival was certainly a bit out of the ordinary. Rather than one of the local suppliers, this was a United States flagged ship, HOS Renaissance. H.O.S stands for Hornbeck Offshore Services LLC, headquartered in Covington, LA (suburban New Orleans.) The company has a fleet of about eighty vessels of several classes. However at year end 38 of these boats were stacked. Therefore the fleet is seeking work no matter where it can be found. 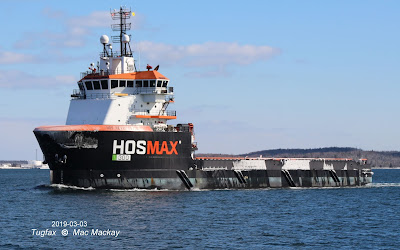 HOS Renaissance is a supplier of the HOS MAX 300 class and was built In 2013 by Eastern Shipbuilding Corp in Panama City, FL. The 3911 gt, 5494 dwt ship has the open deck space for various types of cargo and tanks for liquid muds and other commodities. It is powered by four Caterpillar engines of 7200 kW and through electric motors drive two Schottel Z-drives for 6700 hp. It also has two fixed pitch tunnel thrusters, also of Schottel manufacture. 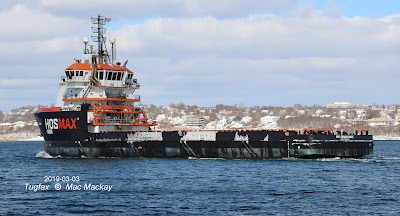 Far from its Gulf of Mexico base, the ship has probably never been exposed to snow or freezing conditions before.

The ship departed Port Fourchon, LA February 21, and tied up at pier 9C. A sister vessel, HOS Red Dawn arrived in here in September 2017 and was fitted out for cable transport. It then sailed for Portsmouth, NH to load. I expect HOS Renaissance to follow the same routine.